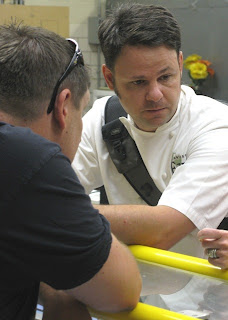 A group of prominent D.C.-area restaurant chefs has volunteered to introduce a novel concept in school service to one Capitol Hill elementary school: collaborating with parents to take over kitchen operations on a non-profit basis, replacing prepackaged and reheated factory meals kids currently eat with food cooked from scratch and served with real plates and cutlery.

Led by Cathal Armstrong, chef and owner of Restaurant Eve in Alexandria, the group would undo the historically knotty issue of school food finances by putting parents to work as volunteers in the cafeteria at Tyler Elementary and using the savings in labor to buy better food, much of it from local growers. The proposal has been approved by D.C. Public School food services, but is still being reviewed by the school system's procurement division, meaning much paperwork, red tape and potential snags remain between now and August 23, when classes resume.

Armstrong's involvement with Tyler Elementary stems from a meeting last year with White House assistant chef and food advisor Sam Kass. This would appear to be the first time that first lady Michelle Obama's anti-obesity campaign has extended its reach into an actual school food service operation.

Armstrong was at the school yesterday to inspect its ancient kitchen and conduct an inventory of equipment needs, taking photographs of everything in sight. He found a space with lots of room to walk around in--and house temporary offices for school staff--but only a gas-fired convection oven for actual cooking. The oven has been used to reheat the packaged meals trucked in from a factory in suburban Maryland. The chefs group, which includes Robert Wiedmaier of Brasserie Beck, R.J. Cooper, formerly of Vidalia, and noted pastry chef David Guas, hopes to turn the space into a fully operational kitchen with equipment donated by manufacturers, including a stove, a dishwasher and sinks.

With only a few weeks to go before school resumes, Armstrong and his cohorts were piecing the project together on the fly, Armstrong, who said involving parents in daily cafeteria operations is crucial to the project's success, met with about 20 Tyler Elementary parents last week at the home of one of the parent organizers, Dan Traster. Traster said an issue of concern to may parents is whether they can find time to help. But Traster said he already is getting calls from parents who are eager to participate.

"People work and they're concerned about whether they'll be able to make the time to help in the cafeteria," Traster said. "But we have many parents who are really passionate about the food issue. They want to do whatever they can."

It was still unclear exactly what role parents would play--most likely not cooking food, but perhaps serving meals from the steam table, clearing dishes and otherwise assisting with meal service in the cafeteria. Traster said he th0ught it would be "a miracle" if the chefs were actually serving meals on the first day of school. But he thought they could be up and running sometime in September or early October.

In an interview at Restaurant Eve last month, Armstrong said the venture began when Kass in a meeting last October provided chefs with a list of local schools to visit and urged them to find way to get involved in improving school food. Armstrong was assigned to Tyler Elementary at 1001 G Street SE, an economically diverse school with a student population of 300, 81 percent of them black, 12 percent white. Sixty percent of the students qualify for free or reduced-price meals in the federally-subsidized meal program.

Armstrong said he was alarmed by the food he saw being served at the school through the school system's contracted food service provider, Chartwells. "It was just awful stuff," he said. In January he met with other chefs at Brasserie Beck, where he reportedly said, "What we are feeding our children is an outrage. We should be marching with picket signs and pitchforks in revolution." Armstrong subsequently formed a non-profit corporation--Chefs as Parents--to fund and operate a school venture.

Allison Erdle, executive director of Chefs as Parents, said yesterday that the group is seeking financial donations, but already has pledges for up to $100,000 to fund the start-up at Tyler Elementary.

School meals have always been hamstrung by poor financing. The federal government currently provides $2.68 for a fully-subsidized school lunch, but most of that goes to pay for labor and overhead, leaving only about $1 for meal ingredients. As a result, many schools don't actually cook at all, but rely on reheating cheap, industrially processed convenience foods--those famous chicken nuggets and tater tots--for their cafeteria menus. Reducing the labor end of the equation--in this case by substituting parent volunteers--would free up cash to purchase better ingredients.

Armstrong, who was a 2009 James Beard nominee for "Best Mid-Atlantic Chef," is an outspoken advocate of fresh, local foods. He sits on the board of Fresh Farm Markets, which operates several farmers markets in the city.

Among the group's goals: "Get rid of all processed food filled with preservatives, additives, food coloring and other chemicals. Find local farmers, ranchers and dairies from which to buy directly. Find foods that are at their peak of ripeness," as well as those that are "organic or sustainably produced to the maximum extent possible." Also, the group would "send positive messages about eating to children and lure them into the kitchen."

Under the proposal the group submitted to D.C. Public Schools, the chefs would train and hire a full-time chef to run the Tyler Elementary kitchen, but it was still unclear what other paid staff might be needed. The group would "start with a menu comprised of simple, delicious and kid-friendly meals," but "our vision and mission includes expanding the food options over time." The proposal also foresees "integration of food and cooking in to the academic curriculum through kitchen and garden classroom....We plan to include the children where possible in cooking workshops and invite teachers to work with us to integrate the kitchen and garden into their lessons..."

The proposal calls for working with "nutrition professionals to address the larger issues at hand caused by type-2 diabetes and childhood obesity, as well as linking food and meals with behavioral and other issues..."

Tyler Elementary is undergoing renovations. The cafeteria was being used to store all sorts of tables, chair, shelving, filling boxes and other paraphernalia. But Armstrong said he was happy with what he saw--especially the big gas line leading to the cooking area, the commercial-quality exhaust hood, and a newly installed steam table.

The project seems like a page from the past, when PTAs ran some school cafeterias. But could this be the future of school food--as charitable cause?