Tell This Woman How Much You Disapprove 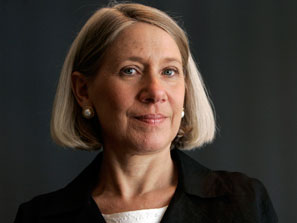 How far behind the times are we?

Much has been written lately about how the food industry has pushed back against "voluntary" guidelines on food marketing proposed by a cluster of federal agencies. Now it appears that one of the Obamas' very own is the chief strategist for the industry assault, having left the White House to join a D.C. lobbying group, SKDKnickerbocker.

Not being a regular Politico reader, I first caught wind of it from Marion Nestle's blog this morning, where she reports on findings issued by the Sunlight Foundation that food interests--including Coca-Cola and General Mills--have poured some $37 million into the campaign to stop the marketing guidelines.

Burros reported in Politico that Dunn's turning on Michelle Obama's favorite project--childhood obesity--did turn some heads, but also did not come as a particular surprise, because she did not embrace the first Lady's thinking on the subject. You can read that as, Please do not piss off our friends in the food industry!

This sort of revolving door is nothing new to Washington politics, but underscores how corporate forces have aligned against children's health. Just to show you how incestuous things are in the nation's capitol, Dunn's husband, Bob Bauer, is a former White House legal counsel who continues to work on Barack Obama's re-election campaign.

The Center for Science in the Public Interest, which has been pushing for years for tougher child nutrition standards, said, "Anita Dunn and her firm should be ashamed of themselves for leading teh food industry's panicky efforts to quash the Obama administration's reasonable and voluntary nutrition guidelines proposed for food marketed to children."

Burros quotes Dunn as replying: "This is a national problem that is not going to be solved by personal vilification."

Maybe personal vilification won't solve this problem. Still, Dunn should be ashamed and I think anyone who cares about children's health should tell her so. Here's the phone number for SKDKnickerbocker: 202 464-6900. Give Dunn a call and tell her what you think.