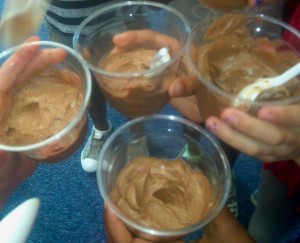 Can't beat chocolate in a cup

The kids in my food appreciation classes are always begging for something sweet. They'd be delighted if we just made cookies and cupcakes every week. Well, I finally obliged. It being near the end of the school year, I figured they were due for a treat. And since we had stopped in Switzerland on our virtual world food tour, we couldn't really pass up a chance to make something with chocolate.

How about a cup of chocolate mousse?

Well, it may not be traditional Swiss, but this recipe is all about chocolate. Plus, the kids get to learn some really valuable kitchen lessons--like how to make custard, how to temper hot cream in egg yolks, how to use a double boiler to melt chocolate, how to fold the chocolate into whipped cream.
They passed with flying colors.

My wife's first comment about our chocolate mousse was, we didn't use the best chocolate. The response to that is, we do try to budget our expenses in these classes. I admit that where we might have spent a fortune on the chocolate (and you certainly may if you like), we instead opted for the Baker's brand, which provides twice as much chocolate for the same price at Ghiradelli's. And I don't think the kids noticed at all.

You won't want to start this without the right equipment: At least three stainless or glass mixing bowls, one large and two medium; a heavy 1-quart sauce pan; a double boiler if you have one (you can also just place a mixing bowl over a pot of water); a good whisk; a fine-meshed sieve. An instant-read thermometer is really helpful.

Plan on making the mousse a day ahead, then refrigerating the finished dessert overnight.

Start by separating four eggs, whisking the yolks together with 3 tablespoons sugar, 1 teaspoon vanilla extract and a pinch of salt in a medium-sized mixing bowl. Next, heat 3/4 cup whipping cream (you'll need another 1 1/4---2 cups altogether--later on) over moderate heat in a heavy 1-quart sauce pan until the cream is just hot to the touch. Drizzle the hot cream into the the egg yolk mix, whisking continuously, until fully incorporated. You want to slowly "temper" the yolks so they don't cook.

To make the custard, pour the egg yolk mix into the sauce pan and heat it, stirring frequently, over moderately low heat until it reaches a temperature of 160 degrees, as measured by your instant-read thermometer. If you don't have an instant-read thermometer, you'll know the custard is finished when it coats the bottom of the pan fairly heavily. It will thicken quickly at this point and you want to be careful not to cook the yolks.

Remove the pan immediately from the heat and pour the custard back into the mixing bowl, passing it through a fine-meshed sieve to catch any bits of cooked egg.

Set the egg mix aside and melt 7 ounces bittersweet (or semi-sweet) chocolate, either in a double-boiler, or by placing a second medium-sized mixing bowl over a sauce pan of lightly boiling water. (You can use the same sauce pan as the one you heated your cream in. Just clean it out first.) When the chocolate has completely melted, stir it into the egg custard until fully incorporated. Refrigerate while you whip your cream. (I like to chill the chocolate mix until it has cooled at least to room temperature.)

In a large mixing bowl, whip your remaining 1 1/4 cups cream to stiff peaks. Fold about one-quarter of it into the chocolate custard, then pour the custard into the large bowl and fold in the remaining whipped cream. Fold gently, using a rubber spatula to scrape the bottom and sides of the bowl. You don't want to knock the air out of the whipped cream. In fact, it's okay to stop folding when the mousse is still lightly streaked brown and white. Or you can continue folding until the cream is completely incorporated in the chocolate.

"Mousse" means "foamy" in French, just like the stuff you put on your hair. And that's the texture--more or less--you want to end up with when you serve the finished dessert. You can either place the entire bowl in the fridge and divide it into individual servings later, or you can scoop the mousse into cups (or cocktail glasses, if you want a really elegant effect) and place those on a sheet pan that fits in your refrigerator.

I think you'll be quite proud of yourself when you see how good this is.
Posted by Ed Bruske at 9:36 AM