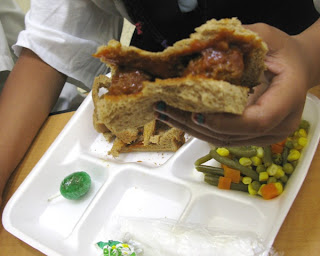 Chartwells, the company contracted to provide meal services to District of Columbia schools, advertised this lunch on its published menu as "meatball sandwich." Here's what it looked like close up.

Getting at the meatballs was a little awkward, sandwiched as they were between two slices of bread. What some of the kids did was open the sandwich and eat the meatballs with their fingers. Kids seem to consider all kinds of foods finger-adapted in an elementary school cafeteria. Some of them ate the bread, others didn't. If you look closely, you can see that this girl removed the crust and left it behind on the Styrofoam tray.

I can't tell if the mixed vegetables were frozen, or out of a can.

This particular girl had started the meal with a lollipop she brought from home. 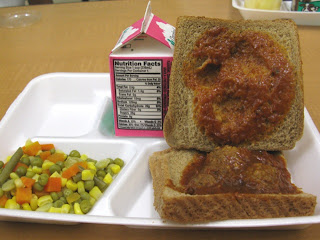 I thought it was worth showing different views of the sandwich. I usually encourage the kids at my daughter's lunch table to take the photos themselves. You can see from one photo to the next how their food selections vary. There's a strawberry milk on this one. 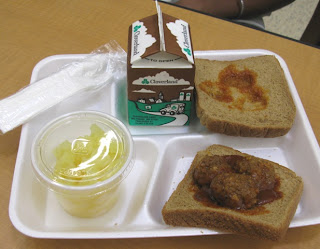 But not every kid took the vegetables. Here you see chocolate milk and the advertised fruit selection, "chilled pineapple" in a plastic cup.

After most of the kids had gone through the food line, the sandwiches switched from these to meatballs on a hot dog bun. Those also had cheese melted on them. The sauce on the meatballs smelled strongly of barbecue, but we couldn't tell for sure. Some kids thought it was regular tomato sauce, others voted for barbecue sauce.

Either way, the meatballs are made at the factory usually from U.S. donated commodity beef, then shipped frozen. I'll see if I can't track down the ingredients for the sauce.
Posted by Ed Bruske at 6:00 AM