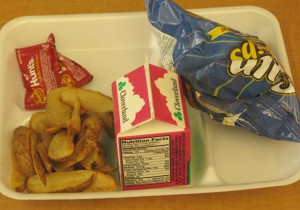 This qualifies as a reimbursable school lunch

A few weeks ago WAMU radio's education reporter, Kavitha Carodoz, interviewed me for a report on childhood obesity and what people are trying to do about it in the
District of Columbia. I appear in part four of the five-part series that aired last week, talking about some of the nastier food D.C. schools have served and how much it has changed in the last year. Now the challenge is getting the kids to actually eat the improved meals (hint: they're not big fans of vegetables or whole grains).

There's a certain freak show aspect to these reports: kids grossly obese, and doctors trying to figure out what to do with them. And the approach hues to crusted-over ideas about obesity: if only we could get kids to eat less and exercise more. Hello! The latest science points to carbs--especially sugary sodas--as the metabolic villain in this epic story. What we really need is a national conversation about insulin, the fat storage hormone, and how we can change our diet to avoid the insulin response to eating too many carbs.

But give our local public radio station credit for devoting resources to expore this important topic. Just a small correction. It's not a soda tax that' funding the city's Healthy Schools Act, which provides extra cash for school meals. That proposal went down in flames--as it does everywhere when the beverage industry sends in its artillery--and was replaced by extending the regular sales tax to cover carbonated beverages, which previously had been treated as food in D.C., meaning not subject to tax.

Anyway, after listening to the series you can watch some video of the reporters being interviewed about what they took away from this endeavor.