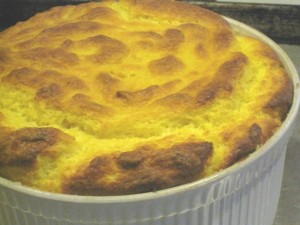 This was the last week in Scandinavia for my food appreciation classes on our virtual world culinary tour. We couldn't very well leave without sampling one of the Nordic region's favorite vegetables: rutabaga.

I know what you're thinking: Rutabaga! Yuck! This underground cousin of cabbage and kale is so closely associated with Swedish tastes that it's often called "swede." I happen to like it--especially home-grown rutabaga--but a survey of rutabaga recipes online left me cold. I wanted the kids to try something a little more inspiring than the usual root vegetable casserole or rutabaga-potato mash.

Then I remembered one of our favorite preparations, from an old Gourmet magazine article: rutabaga souffle. This 20-year-old article that I've saved in my recipe files describes several ways to elevate the lowly rutabaga into something sublime. Rutabaga souffle makes an elegant--and delicious--side dish.

Truly, you can turn almost anything into a souffle. It's just a matter of transforming your base ingredient into something you can fold into egg whites. The basic steps are cooking the rutabaga and grinding it into a paste; mixing that into a sauce made with a basic roux and some of the rutabaga cooking liquid; flavoring with cheddar cheese and fortifying with egg yolks; then finally folding the mix into egg whites and baking in the oven.

When you break it down into these steps, it's really not so complicated. But it is a bit of a workout in a classroom situation, especially if you have to run back and forth from the prep table where the kids are working and the stove at the other end of the room. That's why I've started using my portable butane burner more and more for our classes: I can cook right on the prep table where the kids can see what's happening. Not only can they see what's in the pot, but they can take turns stirring, something they love to do.

There's plenty for the kids to do to make this souffle. They get to peel the rutabaga. (Most had no idea what it was, but several surprisingly guessed the connection with cabbage from the aroma.) There's the grinding of the cooked rutabaga in a food mill, the cracking and separating of eggs (always fun, because they get to separate eggs in their bare hands). There's the stirring of the roux and the mixing of the sauce, the beating of the egg whites and the folding of the final ingredients. And seeing the finished souffle emerge from the oven with its glorious brown top is a show-stopper.

Here's how to do it. First, peel 1 pound of rutabaga and cut into 1-inch cubes. Cover these with water in a saucepan, season liberally with salt and cook, covered, until the rutabaga is quite soft, about 30 minutes. Drain the rutabaga but reserve the cooking liquid.

Meanwhile, in a separate saucepan start a roux by melting 4 tablespoons (1/2 stick) butter. Add 1/4 all-purpose flour, stir and cook over moderate heat, stirring continuously, for a couple of minutes. You don't want to brown the flour, just cook it a thoroughly. Add 1 1/2 cups of the rutabaga cooking liquid and continue stirring. You might want to raise the heat at this point as flour won't fully thicken until it reaches the boiling point.

After two or three minutes, you will have a thick sauce. You can now add 6 ounces grated cheddar cheese. (My wife, the professional cook, suggests half cheddar and half Gruyere for more depth of flavor). Stir until the cheese has melted and is completely incorporated. Remove the pan from the heat and add your cooked rutabaga ground fine either in a food processor or in a food mill. We do everything by hand in our classes--no electric gadgets--so we used a food mill for this. Just as well, as it gives the kids something to do with an appliance they find utterly fascinating.

Rutabaga in the food mill

Separate 6 eggs. Stir the yolks into the rutabaga mix. In a large mixing bowl, beat the egg white to stiff peaks. You can add 1/4 teaspoon cream of tartar to the whites if you have it. This chemical--potassium hydrogen tartrate--is an acid salt that helps give egg whites more volume and stiffness. Again, we do the beating by hand with a wire whisk, but feel free to use an electric mixer. Just don't go overboard or your stiff peaks will start to get grainy.

Stir about 1/4 of the whites into the rutabaga mix, then pour the mix into the bowl with the beaten whites and gently fold everything together with a rubber spatula. Folding is an acquired skill in our classes. We monitor the kids closely so they are stirring or beating the mix. You're trying to maintain the air in the egg whites--that's where "souffle" gets its name, from the French word for "breathe."

When everything is incorporated, pour the mix into a greased, standard-size souffle bowl fitted with an aluminum collar, also greased. (You can grease with butter. We used a cooking spray.) This collar is made from a sheet of aluminum foil cut large enough to completely encircle the souffle bowl. You can fasten it in place with a piece of butcher's twine, but I found it just as easy (and more convenient) to just hold the two ends of the foil together with a large paper clip. The idea is to contain the souffle when it rises up over the top of the souffle bowl. You'll see: the final mix will come up to the top of the bowl, and if you've done your job well with those egg whites, it will rise from there.

Place the bowl on a baking sheet and then in a 400-degree oven for about 60 minutes, or until the top is deep golden brown and the souffle firm. Don't worry--souffles are not all that fragile. It won't collapse if you open the oven door to take a peak. You'll know it's done when the souffle is puffed and no longer sloshing around in the bowl.

To serve, dig a spoon through the crust all the way to the bottom of the dish. You want everyone to see some of that glorious crust on their plate.

As for the seasoning of your souffle, be your own judge. It does pick up quite a bit of salt from the rutabaga cooking liquid and from the cheese. You can add more when you are mixing the base ingredients. But taste it first.

This is one lesson that left me exhausted, but the kids stayed busy and they had a great time. In fact, I would rate this as one of our all-time best cooking lessons.