It's Time for the Inspector General to Investigate D.C. School Food 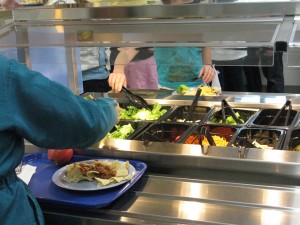 Why do D.C. cafeterias consistently lose money?
By Ed Bruske
aka The Slow Cook

Was former D.C. schools Chief Operating Officer Anthony Tata pulling our leg when he told a room packed with parents and other concerned citizens in August 2010 that school cafeterias had been losing $11 million to $14 million every year on food service?

I was there, and I distinctly remember Tata saying school officials had "found a sweet spot" by hiring Chartwells, a giant food service company, to manage the cafeterias. Sitting next to him was the newly hired DCPS food services manager, Jeffrey Mills, who had spent his first months forcing Chartwells to radically overhaul its menus, ditching Pop-Tarts, chicken nuggets and strawberry milk in favor of chicken on the bone, homemade lasagna and locally-sourced broccoli.

Now comes Mills saying deficits have only gotten worse under Chartwells--a whopping $14.35 million in the current school year. But wait: According to figures Mills recently supplied to D.C. Council Member Mary Cheh, budget overruns in food service have ranged widely. In school year 2006-2007, when DCPS was running its own food service--meaning purchasing ready-made meals packed in a suburban factory--the deficit was $10.8 million. The following year, when food service was still self-operated, the flow of red ink increased to $11.6 million. In 2008-2009, after Chartwells took over, the deficit swelled to $14.4 million. But the following year it shrank to $13, million and fell a whopping 30 percent in 2010-2011--the year D.C. hired D.C. Central and Revolution Foods to serve the food in 14 schools as part of a pilot program.

So why is the budget shortfall back with a vegeance this year--40 percent larger, in fact, at $14.35 million?

Out of control deficits have prompted schools Chancellor Kaya Henderson to demand that her food service team immediately advertise a new "mega-contract" for outsourced cafeteria operations. A request for proposal is scheduled to be published in this Sunday's Washington Post. The last such RFP was published four years ago and led to the hiring of Chartwells. The only other company to bid was Sodexo, one of Chartwells main competitors.

Both companies are part of huge, foreign-based conglomerates. Sodexo is French, Chartwells, which manages food service in more than 500 U.S. school districts, is just a small part of the $14 billion Compass Group, based in Great Britain.

There's no reason to suspect that Chartwells won't bid on the new contract. Or that it might not just win the bidding again and continue under some new terms. That's the last thing Mills would want to see. He wants Chartwells out now so that he can run his own system in-house. But that has put him at odds with Chancellor Henderson, who won't even listen to Mills' proposal and prefers to rule over DCPS cafeterias in typical D.C. fashion--with an iron fist.

Apparently, one thing Mills hasn't learned in his two years on the job is how to navigate the schools bureaucracy. It will be a miracle if he keeps his job. And that would be a shame, since he really has presided over some dramatic improvements. The vastly more appetizing menu-- minus the flavored milk and other processed junk foods--was a great starter. But he also has incorporated lots of locally-sourced produce, taking advantage of extra funding made available in the Healthy Schools Act approved by the D.C. Council two years ago. He started a school breakfast program that has been named the best in the country, along with a new "supper" program that ensures kids don't go home in the evening with empty stomachs. And he's installed salad bars in a number of schools, which has been credited with increasing student participation in the meals program across the board.

That's why it's so important now to ask the city's inspector general to finally untangle the messy finances in DCPS food services. Please tell us why the schools consistently lose so much money every year feeding our kids. We need this kind of baseline information--some real straight talk--so that we can make important decisions in the future about how school cafeterias should be run.

In my reporting on school food, I've chosen to look on these deficits in D.C. as a subsidy for the meals program. For sure, all that red ink helps pay for some of the best school food in the country. But is it also subsidizing too much waste and inefficiency? Do we just pay a lot more for cafeteria worker salaries? Or is too much money simply lining the pockets of Chartwells and its Compass Group shareholders?

If the schools were running deficits before, when they were just ordering the equivalent of factory-made airline meals, how different are the deficits now, when we have a professional food service company making the meals in school kitchens using individual components? These are the kinds of questions the inspector general could answer so that we as a community do not continue to trip over ourselves trying to decide what kind of food service the schools should have, so that we aren't trying to chose a winner between the chancellor and her food services director.

I'm told that asking the inspector general to get involved now really wouldn't help much--it takes a year or two to conduct an investigation and generate a report. But here's the kicker: building a successful food program in a district the size of D.C. is a multi-year process. In Boulder, for instance, where I spent a week observing the results of a dramatic overhaul, Ann Cooper and her team of experts spent a year just studying the local cafeteria operation and devising a plan to change a menu of processed junk to meals prepared by teams of professional chefs. In Berkeley, parents spent years organizing and agitating before they got their vaunted cafeteria overhaul.

Changing school food service in any meaningful way requires political change as well. Butting heads in the D.C. Council chamber, as May Cheh did with Kaya Henderson yesterday, may provide drama and grist for reporters, but it doesn't result in clarity or the unity of purpose we need to move the school food program together. But one thing the Council could do now that would help is ask for a formal investigation by the inspector general. That at least would explain why school food service budgets don't balance, and give us a common reference point with which to hold a civilized conversation down the road.