Time to Take a Stand for Better D.C. School Food 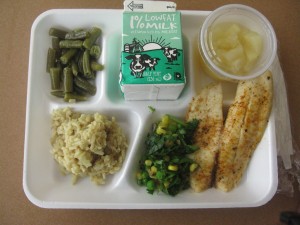 What's for lunch these days? Tilapia

Here's one thing for sure: Lining the pockets of big corporate vendors is not a path to a sustainable school food system. D.C. officials made that mistake four years ago when they opted to hire Chartwells to run the city's cafeterias. Now D.C. Public Schools are staring at a $14 million hole in their budget. The problem Chartwells was supposed to solve has only gotten worse.

But schools Chancellor Kaya Henderson would continue down that path. She refuses to listen to a plan to bring school meal production back in-house where it belongs. Instead, she's ordered her staff to put meal service out for bid again. That may work temporarily, but concerned parents and food activists across the city are asking Henderson to think again and start the process of building a self-operating meals program.

D.C. is one of only a few large school districts nationwide that outsource their food service to companies like Chartwells, Sodexo and Aramark. Most districts know that the only way to feed kids well economically is by running their own kitchens. But making the switch takes lots of planning. It takes an entire community rallying around the important business of how we feed out kids.

That's where you come in. Add your voice to those demanding that we keep the momentum going behind the recent improvements we've seen in D.C. school meals. Sign this petition and send Chancellor Henderson a message: We want our dollars used to put better food on kids' plates, not for shareholder profits.

You can read more about this issue here and here. Details about the new DCPS school meals "mega contract" is contained in the recently published "request for proposal."
Posted by Ed Bruske at 8:06 AM