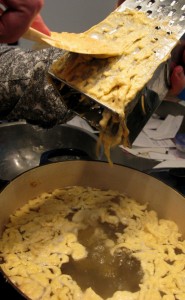 Marco Polo notwithstanding, most food cultures seem to have some version of a noodle in their culinary arsenals. Germany may have the messiest. Called "spaetzle"--or "little sparrows"--this noodle starts with a sticky dough that falls somewhere between pancake batter and library paste and must be pressed through holes into a pot of boiling water.

What? You say you don't care for clouds of steam billowing up your sleeve? You aren't ready to make a gooey, sticky mess out of your favorite box grater? Pish, posh. Spaetzle, it turns out, are quite delicious and worth a little extra pain in the kitchen. Think of a noodle that's almost a pastry, flavored with a bit of nutmeg.

The great dilemma in non-German culinary circles is that most kitchens are not equipped with the standard spaetzle making tool, which looks like a long grater or a plain with large holes. It typically comes with a metal cup to hold the dough, the cup sliding back and forth over the holes. The holes cut the dough, which then dribbles into the boiling water to form the "little sparrows."

Some cooks improvise by pressing the dough through a colander. I think the holes in most colanders are too small, so I opt for my box grater. You have to hold the box grater at an angle over the boiling water so that the dough falls through the opening and not onto the opposite inside wall of the grater.

Once you've got all that figured out, making the actual spaetzle is a snap.

Over a large pot of boiling water, using a stiff rubber or plastic spatula, scrape portions of dough against the large holes of a box grater (or your favorite spaetzle tool), allowing the dough to dribble into the water and cook. Repeat this process until you've used all of the dough. When the noddles are fully cooked, drain them into a colander.

For the finishing touch, melt about 4 tablespoons butter in a large skillet. Over moderately high heat, add the spaetzle and cook, tossing frequently, until the noodles show just the slightest hint of browning.

We served the finished noodles with some brown gravy. They make an ideal side dish to a typical German meal of sausage and braised red cabbage, in which case they are even better dressed with a little gravy.