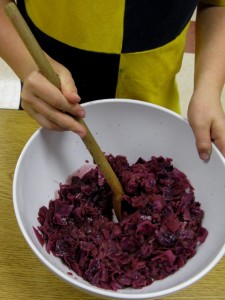 No trick to making this delicious side dish

It's hard to believe anything as simple as cooking red cabbage in a pot could taste so good. But red cabbage may be one of the most underrated of vegetables. With so much nutritional value--to say nothing of the stunning visuals it brings to the dinner plate--we should find more occasions to use it.

"This is your brain on cabbage," I told the kids in my food appreciation classes. And the cross-section of a red cabbage sliced in half does look a bit brainy. At least I thought so. "I think it looks like the inside of a cathedral," said one of the more precocious kids.

In any case, what you'll need to make a family-sized helping of this delicious side dish is little more than a red onion, a red cabbage, some red wine and red wine vinegar and a few spices. It cooks best in a heavy lidded pot. I can't think of anything to go better with a gamy dish such as venison tenderloin, or perhaps your favorite German sausage.

Start by chopping the onion into medium dice and sauteing in olive oil (or bacon grease) over moderately high heat until softened, about five minutes. I like to season the onion aggressively with salt to draw out the liquid. Then add 1/2 head red cabbage, roughly chopped. Stir in 1/4 cup red wine (we used a non-alcoholic wine in our classes) plus 1/4 cup red wine vinegar. Add 1 apple, peeled and grated, and a bouquet garni consisting of 4 whole allspice berries and four peppercorns tied up in cheesecloth. Push this to the bottom of the pot so that it's submerged in the liquid.

Bring to a boil, then cover, reduce heat and cook slowly for about 45 minutes, or until the cabbage is cooked through and tender. After removing from the heat, fish out the bouquet garni and discard. Then for the finishing touch, stir in 1 1/2 tablespoons dark brown sugar and 1/4 teaspoon ground cinnamon. You can make this less sweet if you want. But red cabbage really calls for cookie spices to bring out its innate flavors.

I don't know any kid who doesn't like red cabbage cooked this way. You could almost serve it for dessert.