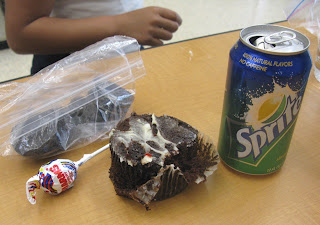 In a film that we recently featured here about the city of Rome switching from re-heated factory meals to school food cooked fresh from scratch, one important element in the system's success was removing choices from school lunch and prohibiting children from bringing food from home. Here in the states, school systems such as the one I recently visited in Berkeley, CA, also prohibit kids from importing snack and junk foods. But that is not the case here in the District of Columbia.

In fact, in recently approved "Healthy Schools" legislation, while schools are expected to remove junk foods and sodas and raise the standards of meals served, a big exception is made for "food" supplied by parents. At my daughter's school, you see kids in the cafeteria reaching inside their backpacks for all kinds of things. Here's an array that one girl brought as part of her lunch: a bag of Oreo cookies, a lollipop, a chocolate cupcake and a can of Sprite.

Still wondering where all the sugar is coming from in kids' diets, or why we're battling an epidemic of obesity? 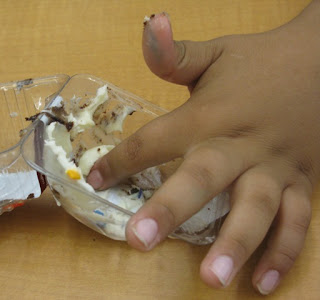 Most of the icing from that cupcake got left behind in the plastic container it came in. The girl simply passed it to the boy sitting next to her, who was only too glad for this unexpected finger food treat.
On another day, the girl brought "Lunch Makers" chicken nuggets from Armour, and a big, 4.4-ounce Hershey's chocolate bar. She broke the chocolate bar into squares and shared them with the kids at the rest of the table.
Posted by Ed Bruske at 6:00 AM