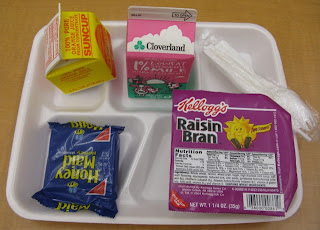 Not according to a recent health column published on the Yahoo! site. Columnist David Zinczenko called Kellogg's Raisin Bran with the smiling little sunshine on the cover "the worst iconic cereal" of all. It's all about sugar. Here's what he had to say:

"It'll be hard to find a more sugar-loaded cereal than Raisin Bran. It’s sweeter than even Lucky Charms, Reese’s Puffs, or Cocoa Krispies. Some of that sugar can be attributed to the raisins’ natural blend of fructose and glucose, but the real culprit is the sticky white armor of sucrose that enrobes each piece of fruit. Both Kellogg’s and Post are guilty of this raisin mistreatment, so what should be a legitimately healthy bowl of fruit and grains pours out closer to a candy-coated dessert."

Fact is, giant food companies like Kellogg's give out huge sums in "discounts" (some people call them "kickbacks") to food service companies like Chartwells-Thompson--the one that provides food service for D.C. schools--to carry their products. And since Chartwells-Thompson serves millions of meals to kids all across the country, we can only imagine what those "discounts" add up to each year.

So there are corporate incentives to steer kids to sugary cereals like Raisin Bran, and also imprint the Kellogg's brand on them in the process.

But if you can't eat good ol' Raisin Bran, what can you eat? Zinczenko recommends another Kellogg's product: All Bran. Just add a few of your own raisins.
Posted by Ed Bruske at 6:00 AM