What Does Sweden's Free School Lunch Say About Us? 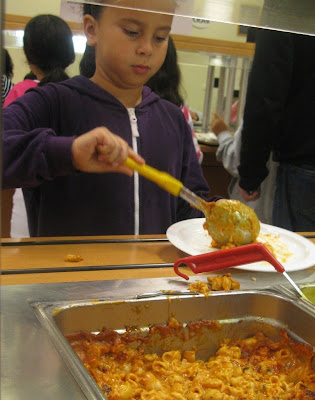 Imagine a school cafeteria where lunch is free for all children, where there are no cash registers, no a la carte lines, no vending machines, where kids serve themselves from long food bars loaded with different entrees as well as salads, and where they pour themselves plain milk or water to wash it all down.

That would be the school lunch I saw in Sweden where, since 1997, all "primary" school children--or those through age 16--are guaranteed a free lunch. Unlike our system here in the U.S., where free lunch carries the stigma of being poor, and where cafeterias serve fast food in order to entice paying children to help finance the program, the Swedes pride themselves on a cradle-to-grave social welfare system that serves everyone equally.

But as I quickly learned during my recent trip to Stockholm, there's no need to idealize the Swedish system. It has plenty of its own problems.

"Fun and interesting article you wrote, I think. We were hoping, though, that you'd be a bit more impressed with the Swedish school meals in general."

That was the comment I received from Annika Unt Widell, the spokeswoman for Swedish School Meal Supporters, after I published the first installment in my recent series on Swedish school food. But as I replied to her, I was terribly impressed with the Swedish school lunch I witnessed. I was also impressed, however, by the number of issues the lunch program there shares with ours here in the U.S.

Chief among those is money, and the fact that the government doesn't supply enough to do meals right.

Things work a bit differently in Sweden, though. There, the money for meals comes out of the general education funding supplied by the national government for each child. It filters through 290 municipalities, then through the individual schools. At each step, school meals may or may not be given high priority. Schools that allocate the most for their cafeteria operations spend three times as much as those that spend the least. While school lunch may be universally free in Sweden, that doesn't mean it is universally good. Sometimes it can be pretty awful.

"My son's school is great but the food is not," said Bronwyn Griffith, and American living in Stockholm with children five and eight. The food in that school comes from Sodexo, the giant international food service company that also has a huge presence in the U.S., and Griffith said her son refuses to eat it.

In the U.S., meanwhile, the Department of Agriculture reimburses schools $2.77 for each lunch it serves to a "low income" child. (That's five cents more than last year, to compensate to inflation.) Children whose family income is too high to qualify for free meals, but still low enough for "reduced-price" meals, earn a $2.37 subsidy. For kids who pay "full price," the federal government chips in 26 cents. The rates are a little higher in schools where at least 60 percent of the students qualify for free or reduced-price meals.

U.S. schools say they can barely scrape decent meals together because they only have around $1 out of the federal subsidy money to spend on ingredients for each meal. Spending disparities in Sweden result in vast differences in food quality from one district to the next. "I have 7.5 Swedish Kroner ($1.19) per lunch per student. Another school in the same town can have 12 Kroner ($1.90)," said Even Bakke, the chef at a school "restaurant" in Goteborg. "That doesn't sound like much of a difference. But it's a hell of a difference for us."

The Swedes are also just getting around to requiring that their meals meet specific nutritional requirements. U.S. school meals if anything are over-regulated. The USDA sets forth strict guidelines specifying not only what kinds of food schools must offer students in order to receive those federal reimbursement dollars, but what the serving sizes must be. Kids have to pass a cashier or "point of sale" not only to make payment, but to demonstrate to a cafeteria employee that the food on their trays qualifies as a "meal," as defined by the federal government.

And this year those rules become only more strict. Schools will have to remove from the steam table most of the French fries and other potato products kids love and offer more stuff kids don't like very much: green and orange vegetables and whole grains.

Perhaps I shouldn't have been surprised to hear that Swedish chefs and school administrators alike describe their biggest problem as getting children to actually eat the better foods they put on their buffets. Like their counterparts here, kids in Sweden grow up surrounded by fast food. The one thing they don't have are food commercials on television aimed at them. That's forbidden in Sweden. To our everlasting shame, we in the U.S. can't get the processed food industry to agree even to voluntary guidelines on marketing to minors. Rather, we've allowed corporate food interests to hijack the health of our children under the guise of "free speech."

As in the U.S., there's a move afoot in Sweden to place more professional chefs in school kitchens. Trained chefs know how to make more out of less--and make it better. As I found in Boulder, where culinary school graduates were drawn into school kitchens by the allure of working with "renegade lunch lady" Ann Cooper, there is a yearning on the part of some chefs to do something more meaningful with their skills than slave over a hot stove in a fancy restaurant. Schools should be looking for ways to attract more of them.

The cafeteria design and service method in Sweden also has something to teach us. Lunch should not be about force-feeding children green vegetables and whole grain pasta, too much of which ends up in the trash. We need to engage kids in the act of making healthier food choices. Swedish children from the earliest grades learn to serve themselves from a food bar. Not only do they learn to like foods they might not otherwise try, they help loosen the Gordian knot around school lunch finances by taking only what they really want. (That's not to say there isn't food waste in Swedish cafeterias. There is, as I described in part three of the the series.)

"No child offered food ever starved," my wife likes to say. The U.S. national school meals program would do well to embrace that maxim. Why not just pay schools for every kid who picks up a cafeteria tray and let them make their own choices? Of course, that would mean the USDA would have to undo many of the rules and regulations it has spent decades putting in place. Government bureaucrats would be horrified to lose their strict accountability standards. But really, U.S. school lunch has become a Rube Goldberg contraption that seems to be more about following government rules than serving children.

"The more dishes, the easier to satisfy the students!" said chef Bakke of the buffet spread he lays out every day in Goteborg. "We serve three different lunch dishes every day, plus a salad buffet and freshly baked bread. The students have no reason to complain about the lunch when they have so many alternatives."

Truthfully, I don't think school meals will ever be universally free in the U.S. It's just not in our DNA. Still, we may have more in common with the Swedes than not. Just like in Berkeley and Boulder, it's obvious that the greatest progress in Swedish school meals is being made by chefs and school administrators who buck convention. As true as it is in other walks of life, this maxim holds for running a successful school meals program: following the rules is a surefire recipe for mediocrity.

It's time to change the rules.