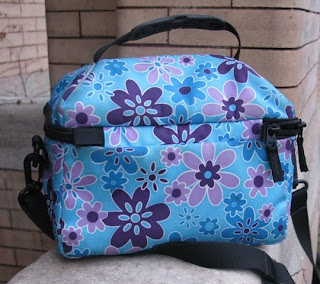 By Ed Bruske
aka The Slow Cook
After I spent a week in the kitchen at my daughter's elementary school and discovered just how bad the food was, daughter started taking her own lunch. It wasn't just what I wrote about the food that convinced her. Around that same time, she reported to her pediatrician for an annual physical. The doctor told daughter, who has grown around the middle lately, that she was eating too many carbohydrates. And she was sympathetic: Her own kids had gained 10 pounds when they started eating at school.
So now daughter is taking her lunch to school, just as she was doing when she attended charter school before enrolling in our neighborhood public school. There's just one problem. At the charter school, there was a microwave in the lunchroom. Daughter could heat her meals. In the local elementary school, there is no microwave. You either take what's offered at the steam table, or you're on your own.
I don't remember eating a hot lunch when I was a kid. I always brown-bagged it. I must have eaten a sandwich every day for years, even through high school. But kids these days expect a hot meal and the absence of a microwave in the lunchroom was the reason that daughter started eating school food in the first place. How to get the food we make at home warm?
My wife went out and bought some thermal containers for daughter's lunch box. But daughter complained that by the time lunch rolled around, the food packed in the morning had grown cold despite the thermal containers.
Recently we stumbled into a solution when we simply couldn't get our act together to prepare daughter's lunch in time for her to leave for school in the morning. I promised to walk it the four blocks to school during the lunch break. The delay proved to be an inspiration: We heated the lunch at the last minute, packed it into the thermal containers and hoofed it over to daughter, who was waiting for the hand-off of her lunch box.
Since then, we've started delivering hot lunch by foot every day. We now have our established rendezvous point. Daughter waits for me to arrive. Lunch might be soup or spaghetti or tofu and edamame. Whatever, it's been freshly heated and daughter can sit down to a warm meal. Meanwhile, I get eight blocks worth of aerobic walking (four blocks each way). And that's in addition to walking daughter to school in the morning. (Mom fetches her in the afternoon.)
So daughter gets her hot meal, I get some extra exercise. Granted, this isn't something every parent can do. We just happen to work at home. And although I kind of like this new routine, I have to wonder: isn't there some way D.C. Public Schools could make microwaves available for kids who bring their own lunch?
Posted by Ed Bruske at 7:54 AM