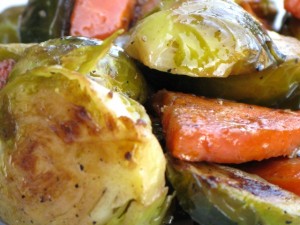 After our food appreciation classes on Wednesday I got wind of a parent spreading the word that she had witnessed our kids fighting for helpings of Brussels sprouts.

Well, the moral to this story is that sometimes food is all about the preparation, not necessarily the ingredients. Many vegetables, cooked badly, are simply unpalatable. And I suspect that badly is how most people cook Brussels sprouts. But not us. We have a special preparation that's darn near irresistible. Here's how it goes:

For a pound or more of sprouts, trim away the stem ends and cut the sprouts in half lengthwise, removing any loose leaves. Cook the sprouts until barely done in a large pot of salted water. Drain the sprouts into a bowl of cold water to stop the cooking process, then dry the sprouts thoroughly on sheets of paper towel.

For the next step you'll need a heavy skillet liberally greased with olive oil over moderately high heat. When the oil begins to smoke, cover the bottom with sprouts laid flat-side-down. You'll need to do this in batches. Allow the sprouts to brown, then turn them over with a pair of tongs or simply toss in the skillet. Douse liberally with red wine vinegar--you'll get a burst of steam and noise--and toss again. Season with granulated sugar, salt and black pepper to taste. Continue cooking another 30 seconds, or until most of the liquid in the skillet has evaporated. Set aside and continue with the next batch of sprouts.

You might not believe it, but our kids could not get enough of these sweet and sour sprouts. Maybe it was the excitement of seeing that cloud of steam when we added the vinegar to the hot skillet, the popping and sizzling, or even the brief flames as we tossed the sprouts in the oil. Whatever--this is one way you definitely can get children to eat their vegetables.

Note: I neglected to take photos of this week's classes and for some reason don't have any pictures of sweet and sour Brussels sprouts in my files. The photo I've shown here is the closest thing--the carrots are an extra bonus.