Lasagna: It Really Was Homemade! 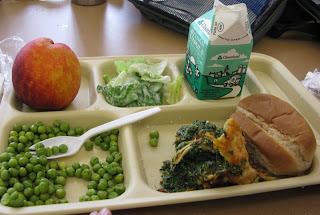 By Ed Bruske
aka The Slow Cook
Recently I inferred that the spinach lasagna in this photo, taken on the second day of school at my daughter's elementary school here in the District of Columbia, was frozen and not "homemade," as Chartwells had indicated on its published menu.
I was wrong. When I walked into the cafeteria yesterday to photograph the food, the kitchen manager gently corrected me. "I made that lasagna," she said proudly.
Well blow me down.
She couldn't tell me whether each and every D.C. school that Chartwells now serves (I believe that would be 108) made its own lasagna that day. But more importantly, the lasagna was not some processed import, frozen and re-heated like most meals from Chartwells in the past. It was made by layering lasagna noodles with tomato sauce, frozen spinach and grated cheese.
As I've been gathering the last two weeks, there's been a real revolution underway in D.C. Public Schools food service. According to Food Services Director Jeffrey Mills, who spent a good part of his summer testing hundreds of alternate menu items, the Chartwells menu has been completely changed. The kitchen crews got extra training over the summer, and now we're seeing lots more freshly prepared foods on kids' cafeteria trays.
In fact, we've been making a big deal about D.C. Central Kitchen's involvement in a pilot program this year, cooking meals from scratch for seven D.C. schools. But here we have the DCPS kitchen staff showing that they can cook from scratch, too.
Congratulations, D.C. kitchen ladies! What's next on the agenda? Homemade soup maybe?
Posted by Ed Bruske at 10:00 AM