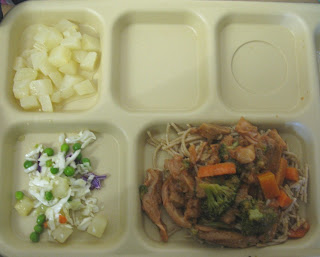 You have to give the D.C. schools credit for using a little more imagination than simply slapping processed packaged foods on kids lunch trays. Last year the Chartwells drill was to dump frozen meal components on a baking sheet, reheat them and call them lunch. But a summer of carefully scrutiny and tinkering by the schools food services department has resulted in more artful meals.

Take this "sweet and sour chicken," for instance. No doubt the chicken arrived cooked a frozen in those strips you see in the photo. They may have been already seasoned at the factory (I haven't seen the packaging, so I don't know for sure.) The broccoli and carrots also may have been pre-cut and frozen, or perhaps they were merely refrigerated and arrived in large bags from the processor.

In any case, they were all assembled and sauced in the school kitchen, something requiring a little more care and craft than in the past. It actually looks like something you might see in a restaurant. It's been served over "soba noodles," according to Chartwells. I couldn't tell if they were actually Japanese soba noodles, or merely whole wheat pasta noodles. Still, this deserves an "A" for effort, wouldn't you say?

The the left is an interesting "Asian slaw" made with locally grown cabbage. The local cabbage earns this meal a five-cent bonus from the city treasury. We have definitely seen the effects of that incentive, created in the recently-approved "Healthy Schools Act" here in the District of Columbia. Local fruits and vegetables have been showing up in meals on a daily basis.

The pears in the slaw look suspiciously like those in the "pear cup." But nobody's complaining.
Posted by Ed Bruske at 12:01 PM