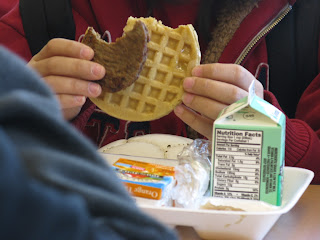 One of the more amusing (or not) aspects of school meals is watching kids try to cope with actually eating the foods they are served with the available plastic cutlery, which does not include either a knife or a fork.

Using their "spork"--or combination spoon and fork--kids often will attempt to shovel unwieldy foods directly into their mouth. But just as often they dispense with the niceties of cutlery altogether and just go at food with their hands.

I've seen them scoop up mashed potatoes with their hands and plaster it on so-called Salisbury steak. I've seen them pick the noodles and cheese out of their spinach lasagna and eat it with their fingers. This morning, they were devising ways to consume a crusty waffle (reheated from frozen) and breakfast patty of turkey sausage.

As you can see in the above photo, one girl's solution was to make a kind of sandwich out of the waffle and the sausage. She proceeded to munch away at the waffle until it matched up perfectly with the sausage. 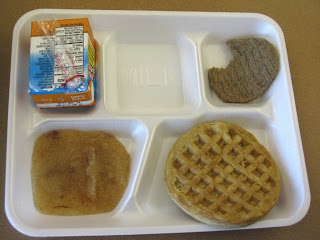 The brown stuff in the lower left was advertised at the Chartwells website as a "warm cinnamon apple topping" for the waffle. But I did not see any kids deploying it as such. Mostly it went uneaten and was thrown in the trash.

My daughter, who arrived a little later than most of the other kids, waited about 10 minutes for the kitchen to prepare a fresh batch of turkey sausage. But when she tasted it, she threw it back onto the tray. "That's nasty," she said.

This highly processed patty is colored to look like a traditional pork sausage, but the flavor is entirely missing. In fact, it is somewhat over seasoned with red pepper flakes, but otherwise is totally bland, as if it hadn't been salted at all. So between the soggy cardboard-like texture and spicy flavorlessness, this sausage is a turnoff. Although I must say most of the kids ate it anyway and went back for seconds.
Posted by Ed Bruske at 10:23 AM