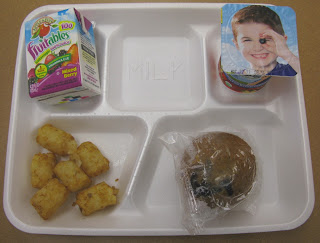 Just when you thought we'd gotten rid of the tater tots, they show up on the breakfast menu. My daughter couldn't wait to dig into hers. In fact, kids wolfed down the potatoes and ran back to the food line for more. After pizza, potatoes are kids' favorite food in the federally-subsidized meal program.

But with all of the other starches and sugars on this tray, were potatoes really necessary? The USDA's proposed new meal guidelines would cut back sharply on "starchy vegetables" such as potatoes, corn and peas. But they would also add 80 percent more grains to breakfast in the form of "whole grain-rich" products.

In other words, kids will be getting tons more starch, as long as it contains 51 percent "whole grain." So don't be looking for actual whole grains, but rather processed foods that have "whole grain" added.

This particular breakfast is full of starch and sugar. Consider what Chartwells advertises as the "all natural whole grain bluenanaberry muffin," next to it the "oven baked hash browns" that are actually re-heated, processed tater tots. Then there's the 4.23-ounce container of "fruitables" juice, containing 12 grams of sugar and the four-ounce container of Stonyfield organic yogurt containing another 13 grams of sugar.

Between the juice and the yogurt alone kids are consuming the equivalent of nearly six teaspoons of sugar, to which is added the starch from the potatoes and the muffin. Most people still fixate on fat in kids' diet, while it's the starch and sugar in foods like this that are intimately linked with rampant illnesses such as diabetes, hypertension and heart disease.

That's quite a lot to be trying to disguise with soothing labels such as "all natural" and "organic" and "100 percent juice."
Posted by Ed Bruske at 10:10 AM