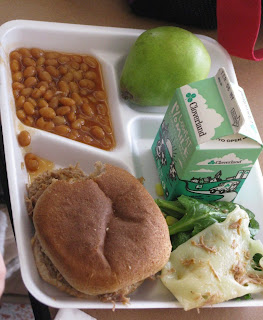 A traditional "Cuban" sandwich is made with roast pork, ham, Swiss cheese, pickle and maybe some yellow mustard all squished together on a special griddle between two slices of Cuban bread.

Chartwells was advertising what you see here as a "turkey Cubano." I thought it looked--and tasted--more like pulled pork without the barbecue. For some reason, many of the kids rejected the cheese. 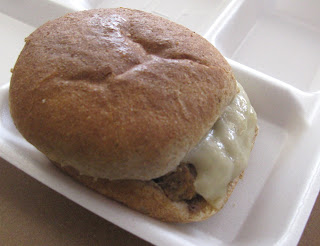 Here's a closeup of the sandwich. It's made from a pre-seasoned, roasted turkey breast that the kitchen manager chopped into small pieces, much as you would do with pulled pork.

The aroma was not so appetizing. But the flavor of the sandwich, built with two slices of "whole wheat" hamburger bun, was not so bad. I might have exchanged the cheese for some barbecue sauce. 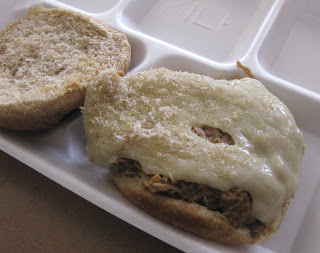 This is what it looked like when you removed the top. 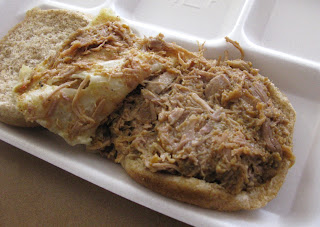 And here's the meat revealed after peeling back the cheese.

Kids seemed to like the beans, the spinach salad not so much.
Posted by Ed Bruske at 6:00 AM