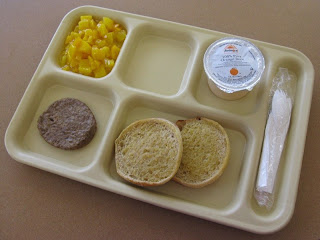 By Ed Bruske
aka The Slow Cook
This is what Chartwells was serving for breakfast this morning at my daughter's elementary school here in the District of Columbia: turkey sausage on "whole wheat biscuit," according to the menu published at Chartwells' website, along with "locally grown peach," and orange juice.
The turkey sausage looks pretty much like the sausage we're used to seeing, and the "whole wheat biscuit" looks a lot more like an English muffin, or maybe a cross between bread and an English muffin. Calling it "whole wheat" is a bit of a stretch, I think. Maybe it had some whole wheat in it.
As for the "locally grown peach," that sure looks like canned peaches to me. It certainly isn't a peach, and it certainly has been processed somehow. Not that that has to be a bad thing. The question would be whether there's added sugar in it.
The "Healthy Schools Act" provides a five-cent bonus for each lunch meal--but not breakfast--that contains a component that is "locally grown and unprocessed."
This proves once again that you can't judge school meals by what's written in the published menus. You really need to see what the kids actually end up with on their trays--and what they actually eat.
Speaking of trays, this one is re-usable, not the disposable Styrofoam stuff we saw at every meal last year. But this is also a different school. My daughter has transferred.
Posted by Ed Bruske at 9:25 AM