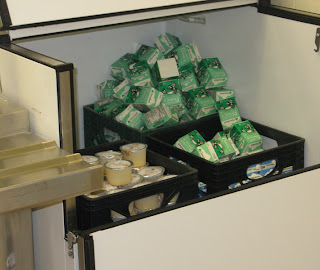 By Ed Bruske
aka The Slow Cook
Notice anything different about this milk cooler at my daughter's elementary school here in the District of Columbia?
This is the place kids head first when they enter the food line in the cafeteria. In the past, there was always a scramble to get there and grab either a chocolate- or a strawberry-flavored milk. It wasn't uncommon at all to see kids at breakfast pouring a strawberry milk containing 28 grams of sugar (6.5 teaspoons) into a plastic container of Apple Jacks cereal with another 8 grams of sugar (2 teaspoons). When you added in Pop-Tarts, fruit juice and Giant Goldfish Grahams, kids in D.C. frequently were eating 60 grams of sugar (15 teaspoons) before classes even started.
And you're wondering why we have an obesity epidemic?
But earlier this summer D.C. Public Schools officials quietly determined to ditch the flavored milk and serve only cereals with six grams of sugar or less. Despite the absence of any fanfare, the decision sent reverberations around the country, and even to the United Kingdom, where Jamie Oliver featured it on his website.
True to their word, D.C. schools this morning had no flavored milk on display in the cafeteria, just what you see in this photo: low-fat and fat-free milk and orange juice. Not shown are the tubs of Honey Kix cereal being offered. They contain 4 grams of sugar per serving, according to the label.
Now we just have to get the fruit juice switched to whole fruit. Fruit juice delivers a concentrated dose of sugar in the form of fructose. It's cheap, but much better would be whole fruit, which not only contains less sugar, but also delivers the fiber that's squeezed out in the juicing process.
So take a bow, parents. Your hard work shining a light on what schools serve in the cafeteria has already paid benefits. Food service officials say they've been busy testing new products and making changes to the menu their hired food service provider, Chartwells, will be serving this year. We need to be there with the kids in the cafeteria to see how those changes unfold.
Posted by Ed Bruske at 9:19 AM