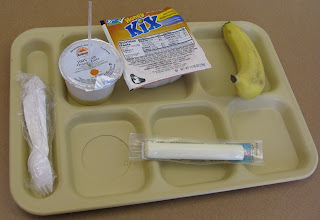 Breakfast in a District of Columbia elementary school has a pared-down look this year. Gone are the Pop-Tarts, Giant Goldfish Grahams and Otis Spunkmeyer muffins we saw virtually every day in the past. Food Serivices Director Jeffrey Mills, who took the job some eight months ago, has said he wants to eliminate processed foods as much as possible from school menus.

Also gone are the flavored milks with so much added sugar that kids drank with breakfast and with lunch. The new choice is low-fat or non-fat plain milk. And sugary cereals such as Apple Jacks and Chocolate Frosted Mini-Wheats are no longer an option. The schools now serve only cereals containing six grams or less sugar, such as these Whole Wheat Honey Kix, which contain only four grams of sugar per serving.

As you can see from this photo, kids sometimes can also choose a piece of string cheese with breakfast. On Wednesday they were offered zucchini bread and cottage cheese. Cheese, cottage cheese and yogurt are good sources of calcium for kids who don't drink milk--like my daughter, who is lactose intolerant.

Between the sugary cereals, the flavored milk, the fruit juice and the sugary processed treats, kids in D.C. schools used to consume up to 60 grams of sugar (15 teaspoons) before classes even started. Does that make sense in the middle of an obesity epidemic?

Parents who were distressed over the amount of sugar being fed to kids in school are glad to see these changes, which also teach valuable lessons about what healthy food looks like. What do you think? What is your local school serving for breakfast?
Posted by Ed Bruske at 6:00 AM