Breakfast: Another Dose of Sugar 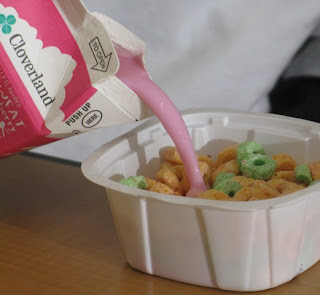 By Ed Bruske
aka The Slow Cook
Here's how D.C. kids get sugared-up at school in the morning: strawberry-flavored milk poured over Apple Jacks. I know, this picture looks staged, like a studio shot. But I assure you the person pouring the milk and eating the cereal was actually a third-grader. This time of year, we happen to get fantastic light through an east-facing wall of windows in the cafeteria of my daughter's elementary school, which makes for this striking photo.
The strawberry milk contains 28 grams of sugar in an 8-ounce carton. That's the equivalent of more than six teaspoons of sugar, a bit less than Mountain Dew. Of course, nearly half that sugar comes from lactose that occurs naturally in the milk. The rest is high-fructose corn syrup, which increasingly is being linked to non-alcoholic fatty liver disease.
The Apple Jacks are made by Kellogg's, a company with a huge footprint in D.C. school cafeterias. That's probably because giant food corporations like Kellogg's give big "rebates''--sometimes called kickbacks--to food service providers who use their products. These are like the stocking charges in supermarkets. The food makers pay to have their brands displayed.
Chartwells, the contracted food provider for D.C. Public Schools, itself is a huge company with a presence in more than 550 school districts around the country. With its vast distribution of products, it stands to take in huge sums of money in "rebates" from companies like Kellogg's. This might help explain why kids in D.C. are eating sugary cereals such as Apple Jacks in the morning.
A .63-ounce container of Apple Jacks contains 8 grams of sugar, about two teaspoons. Here are the other ingredients listed on the package:
Whole grain corn flour, wheat flour, whole grain oat flour, oat fiber, soluble corn fiber, salt, milled corn, dried apples, apple juice concentrate, cornstarch, cinnamon, natural and artificial flavor, sodium ascorbate and ascorbic acid (Vitamin C), modified corn starch, yellow #6, niacinimide, reduced iron, zinc oxide, turmeric color, baking soda, pyridoxine hydrochloride (Vitamin B6), blue #1, calcium phosphate, riboflavin (Vitamin B2), Thiamin Hydrochloride (Vitamin B1), red #40, Vitamin A Palmitate, BHT (Preservative), folic acid, Vitamin D, Vitamin B12.
There is some controversy surrounding BHT because it has been suspected of causing hyperactivity in children. But it is also sold in health food stores for purported anti-viral effects.
Posted by Ed Bruske at 1:00 PM