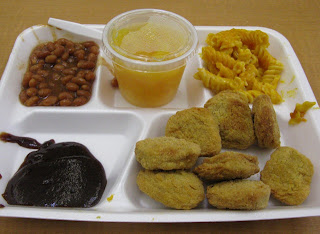 By Ed Bruske
aka The Slow Cook
Cheap carbohydrates are the favorite foods of school districts across the country. What's wrong with carbs? Unlike protein and fat, carbohydrates turn into sugar (glucose) when you eat them, which signals the body to produce insulin. A powerful hormone, insulin is responsible for storing fat in the body and has also been implicated in an all-too-familiar complex of modern diseases: obesity, diabetes, high blood pressure, atherosclerosis.
Teachers complain that kids are out of control after school meals. The high doses of sugar and other carbs could be an explanation. Kids get an initial jolt of energy from this type of meal, but typically the body overcompensates with insulin: After eating so many carbs, you will soon be feeling lethargic and hungry again.
Consider this meal served last week at my daughter's school. The entree is a highly-processed version of chicken nuggets, but you can't see the chicken under all the breading (carbs). Next to the chicken nuggets is a big blob of sugary barbecue sauce for dipping (pure carbs). The baked beans are all starch (carbs) swimming in a sugary sauce (more carbs). The macaroni and cheese is mostly refined pasta (carbs).
So far this meal is perfectly acceptable under the rules that govern the federally subsidized meal program. You've got protein in the chicken and a little bit of fat in the cheese, plenty of grain (no kidding) and the beans. Instead of a vegetable, we have fruit: a cup of diced peaches. Healthy, right? Well, maybe, if you don't count all the sugar in those peaches.
And as a beverage with this meal the kids were served orange juice rather than milk. I checked the ingredients on the carton. A 4-ounce serving contained 12 grams of sugar, about the equivalent of three teaspoons.
Truly, this meal is enough to send anyone's blood sugar through the roof.
Posted by Ed Bruske at 7:03 AM