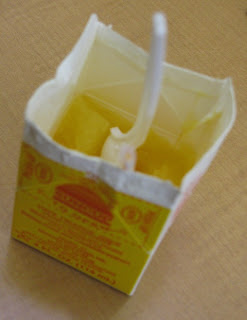 According to my daughter, the juice served at her school invariably is frozen. My visits to the cafeteria confirm that. The juice arrives at the school frozen, either in a carton like this or in plastic containers with foil seals, then is moved to a refrigerator to thaw, but never really gets an adequate chance to convert to its liquid form.

The kids, however, don't seem to mind at all. They make sport of it, turning the frozen juice into "slush."

Here you can see how my daughter has peeled the carton of orange juice open so she can dig into it with one of the plastic combination spoon/forks (sporks) that are always available in the cafeteria. After pounding away at the frozen mass, they eat it more like ice cream, then suck up any liquids with a straw.

According to the label, this 4-ounce carton of OJ contains 12 grams of sugar, or slightly less, ounce-for-ounce, than Coca-Cola. Many schools such as those in the District of Columbia have banned sugary soft drinks, but there's just as much sugar in "healthy" drinks such as juice and flavored milks.
Posted by Ed Bruske at 6:00 AM