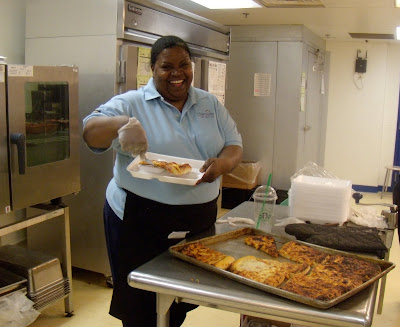 I did it. I went back to school and got in line last week with a bunch of fourth graders braving the gambit of "hot lunch" at Key Elementary School. Lunch was "Herbed Beef Italiano," though the kids referred to the ground meat as bbq barf. (Not much has changed since I was in school after all.) Most of them opted for the grim looking noodles naked, but the beef sauce was surprisingly flavorful, and the noodles were pretty much inedible without it. There was also a salad, and I have to say that was pretty good with fresh cold lettuce

I talked to Ms Coates, our cafeteria manager, who does the best she can with whatever is given to her. Key School is one of the few newly renovated schools in D.C., and it has an enormous kitchen, but it's missing one rather key component- a stove. (I'm not sure how to explain that except for the expression "how D.C. is that?") Today's lunch was Pizza Fiestada (which our principal referred to as the meat lover's, but is really a brand name Mexican pie) and cheese pizza- both of which came with a tiny bag of raw carrots. Apples and a whole wheat deli wrap were offered as an alternative.

Most of the kids predictably went for the pizza which arrives frozen and is baked by Ms Coates on site. It wasn't bad at all, but I did notice I was inordinantly thirsty after the last lunch so I grabbed a low fat milk this time. What could they do to that? All I can say is I was astounded when I saw the milk matched the pink carton. If only I had read Breakfast: Another Dose of Sugar , which Ed Bruske posted yesterday, I would have been prepared for the phenomenon known as strawberry milk. It's got to go. 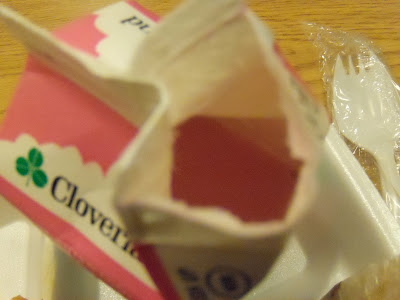