There is No Plan 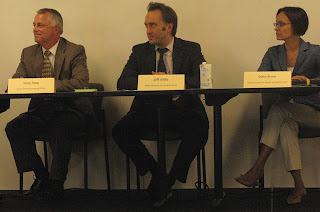 Those who went to a "food services round-table" with D.C. school officials expecting to hear a long-term strategic plan for improving school food came away disappointed last night. Despite good buzz around the announcement of vendors for two new pilot meal programs offering more fresh and less processed food, it's clear that schools Chief Operating Officer Anthony Tata and Food Services Director Jeffrey Mills are utterly fixed on the idea that a hired contractor can somehow deliver more for a buck than what the schools are currently getting from their hired food provider, Chartwells.

This might help explain why Mills has begged off visits to places such as Boulder, CO, and St. Paul, MN, where public school districts are "self-operating" some of the most innovative food programs in the country. The key difference, of course, is that paying vendors to provide school food means that money that otherwise could be used to improve the quality of the food on cafeteria trays instead ends up in the pockets of hired contractors as profit. But as Tata explained to a room full of parents and food activists last night, food is not a "core competency" of schools under the regime of Chancellor Michelle Rhee, a polite way of saying that D.C. schools don't know how to cook or run a food service operation.

Tata said that the schools were losing "$11 million to $14 million" annually before Rhee took office, an astonishing amount considering that kids were being fed pre-packaged airline-style food trucked in from a factory in suburban Maryland. Chartwells, as part of its contract with D.C. Public Schools, agreed to cut those deficits at least in half. Tata said the school food deficit ran around $7 million in the last year. And that was to serve kids industrially processed convenience foods, such as Apple Jacks, Pop-Tarts and strawberry-flavored milk for breakfast, and frozen "beef crumbles," tater tots and steamed-to-death broccoli for lunch.

A former military procurement specialist, Tata said he and others conducted a "deep dive" into the school food issue last fall and realized they needed someone to fill the food services director job that had been vacant for a year. Enter Jeffrey Mills, a restaurant developer from New York, who almost immediately focused on starting a school garden program. The garden program is still in development. Meanwhile, Mills last night said he and his staff in recent weeks have taste-tested some 300 products, looking to improve the food Chartwells serves.

"I think I tasted 30 different chicken products the other day," Mills said. Mills and Tata have decided to discontinue serving flavored milk in D.C. schools beginning this month, a move that has reverberated around the country and was greeted with cheers from last night's audience. In other school districts, the dairy industry is campaigning to keep chocolate and other flavored milk products with added sugar in schools. But Mills said he is determined to remove processed foods from school menus and introduce locally grown produce.

Mills said he has been meeting with local farmers and produce distributors and has concluded "there is a ton of local produce around us." He said one local distributor, Keany Produce, has assured him it could fulfill the school system's needs, but there remains a question of how to introduce local fruits and vegetables that kids will actually eat. The Chartwells scheme relies on frozen foods that can be served with minimal preparation or skill. Mills has a financial incentive to change that. Under the "Healthy Schools Act" passed by the D.C. Council earlier this year, schools will receive a five-cent bonus in funding for every meal they serve with a locally produced food component.

To introduce some competition into the meal vendor system, the schools announced on Monday that they had chosen D.C. Central Kitchen and Revolution Foods to run the pilot meal programs, each targeting seven schools, one group slated to receive "portable" meals made in Revolution Foods' facility in Glen Burnie, MD, the other to be served meals made on site from scratch by D.C. Central Kitchen's catering arm.

Another recent innovation, also mandated under "Healthy Schools," is breakfast service in classrooms instead of in the cafeteria. Some parents have raised concerns that feeding children breakfast in the classroom will cut into valuable instruction time. The president of Bancroft Elementary Schools' PTA last night said that disadvantaged children stand to be especially harmed by any loss of lesson time. But Tata replied that the breakfast program has been designed to take place before classes begin.

A school principal who attended the meeting said from what she has seen so far, breakfast in the classroom has been a resounding success, creating a "family style" atmosphere in which kids bond with each other and with their teachers, are more likely to eat and less likely to be tardy or act out. In other school districts, classroom breakfast programs also have proved to be a great funding source for school meal programs, since participation is nearly 100 percent and a high percentage of the meals qualify for subsidy payments from the federal government. In D.C., breakfast is offered free to all students.

Other parents were concerned that schools are not doing enough to teach children about nutrition and healthy food choices. Curiously, Tata last night described this as a "zero-sum game," pitting nutrition education against core subjects such as math, reading and science. Diana Bruce, wellness director for D.C. schools, said nutrition is taught in health and physical education classes, and that teachers have latitude to teach nutrition lessons through their core subjects. But at the moment, food does not rate its own education platform in D.C. schools.
Posted by Ed Bruske at 11:26 AM