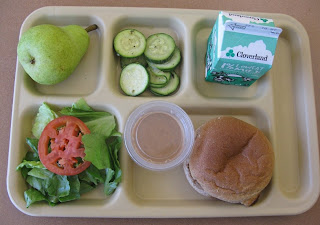 My daughter looked at the Chartwells menu for lunch, saw it was a chicken sandwich and decided she didn't want any part of it. She packed her own lunch. She just doesn't like the processed chicken patty on this sandwich. The lettuce and tomato salad you see here is actually intended as a topping for the sandwich, with a plastic container of barbecue sauce to finish it off. It looked more like peanut sauce to me, and I don't think I saw any of the kids use the salad or the sauce as it was intended. Were they supposed to get instructions in the food line?

What looks like cucumbers is actually "locally grown zucchini," according to the Chartwells website. I assumed the pear was local, but the website does not say so. The schools would get an extra five cents from the District of Columbia to pay for this lunch by virtue of the zucchini being local. But vegetable side dishes are a hard sell in the cafeteria, and the kids were not exactly attacking these zucchini.

I stayed through the entire lunch period to see what the kids did with their pear. Was it ripe? Was it edible? Would they eat it? It turned out to be a little hard, but the kids seemed to like it. Like most whole fruit served in schools, it was bigger than they needed. But what they did eat, they ate with relish. In Berkeley, Calif., the schools have found an orchardist who sells them his small, kid-size apples. Would it be hard--cheaper maybe?--to find growers here who can supply smaller fruit?
Posted by Ed Bruske at 7:29 AM