Is There Enough Corn on this Tray? 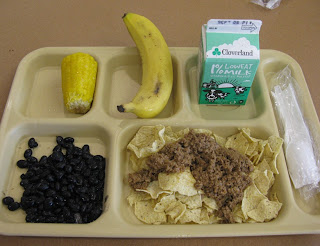 Chartwells listed "taco salad" with ground turkey meat and "baked whole grain tortilla shells" as the entree for this meal. So what was the thinking behind including still more corn in the form of corn on the cob as the vegetable?

The menus at Chartwells' website also called for a "locally grown nectarine" with this meal. But as you can see, the fruit is a banana. The nectarine would earn school food services an extra nickel from the D.C. treasury for being local. So if this is simply a matter of a delivery slip-up--or maybe a few schools getting bananas instead of local nectarines--how will the food services department account for that when it comes time to ask the city for its locally-inspired check?

Now that school is back in session, a number of wrinkles are starting to become apparent in the "Healthy Schools" law passed this year by the D.C. Council, such as a possible accounting nightmare where the local food component is concerned.

Meanwhile, my daughter was so taken with the idea of tacos for lunch that she decided not to bring a lunch from home. Tragically, she was one of the last kids in line and by then the kitchen had run out of tacos. The alternate was salad. She doesn't like salad. So this is what she got for her $1.25: 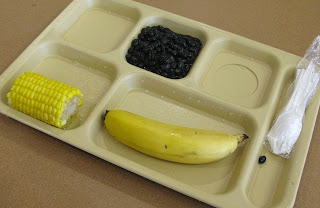 Under the "offers versus served" rule that prevails in the federally subsidized school food program, this qualifies as a meal. Children are offered an entree, milk and three other items. They must choose three. Even kids who pay full fare are underwritten by the feds to the tune of 25 cents. This year for the first time, kids who only qualify for "reduced price" meals don't have to pay anything at all. The city is picking up the tab, care of the "Healthy Schools Act" passed earlier this year and a sales tax imposed on soft drinks.

Fortunately, daughter really likes black beans, bananas and corn on the cob. Not so fortunately, this corn on the cob was obviously the frozen variety and cooked to death. It was mealy and dull. Most of the kids declined to eat it. They also shied away from the black beans, which Chartwells advertised as "Southwest beans." They looked straight out of the can to me. 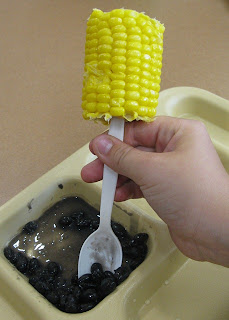 Kids are terribly inventive around lunch. Look how they dealt with the corn on the cob: speared on the end of their spork to make for easier eating. 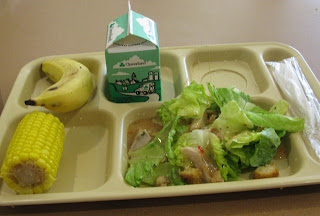 This was how the alternate looked. In fact, it was a delicious looking salad, complete with croutons.
Posted by Ed Bruske at 12:01 PM