The Truth About "Whole Grains" in School Meals 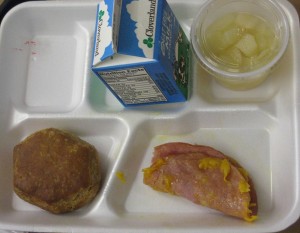 If the U.S. Department of Agriculture has its way, kids will soon be seeing lots more whole grain food on their cafeteria trays--up to 80 percent more at breakfast under the agency's proposed new meal guidelines [PDF].

But as my colleague Lisa Suriano pointed out in this space recently, if you thought that meant spelt and quinoa suddenly making an appearance in the nation's lunch rooms, you might want to re-assess. In fact, federal rules permit products containing just 51 percent "whole grain" flour to be classified as "whole grain."

Forget the Middle Easter tabouleh. More likely, what kids will be served is lots more dinner rolls, hamburger buns, muffins and pizza crusts with added fiber. That would be the new definition of "healthy."

The U.S. Food and Drug Administration approved the 51 percent rule after the food industry petitioned the government in 1999. The USDA has its own euphamistic turn of phrase for these fiber-boosted buns and crusts. It calls them "whole grain-rich."

Ironically, the feds want schools to substantially boost "whole grain-rich" foods that contain 49 percent starchy white flour at the same time they propose cutting way back on "starchy vegetables" such as potatoes. Schools would be limited to only two weekly servings of things like french fries and potato wedges.

Not surprisingly, wheat is one of the most heavily subsidized crops in the U.S.--wheat farmers received more than $2.2 billion in taxpayer funds in 2009--while potatoes aren't. You can also add to the list of un-subsidized crops most other healthful whole grains--quinoa, barley, amaranth, to name a few--which makes them much more expensive than "whole grain-rich" products.

The only actual whole grain the USDA makes available to schools through its commodities program is brown rice, and you don't see that on school menus very often. Of the 48 grain products on the USDA’s list of commodity school foods [PDF], 17 fall under the “white flour” category and 12 under white rice. The USDA only lists three brown rice products.

The proposed meal guidelines even make a special allowance for grain-based desserts, although elsewhere the USDA says it wants to limit sugar on school menus.

According to Lisa Suriano, a nutritionist and school food educator, schools could prepare a half-cup dish of bulgur wheat for 24 cents per serving. But most schools have only $1 or less to spend on ingredients for each lunch meal. Congress, while calling for new meal standards that are bound to jack up the price of meals, only provided 6 cents in its most recent re-authorization of the federally-subsidized meals program.

Working extra fiber into school menus is only the first hurdle. The real trick is getting kids to eat it. They happen to love potatoes and rather dislike whole grains, although these do go down easier when smothered in cheese, pizza sauce and slices of pepperoni.

In Boulder, Col., schools, cooks put tabouleh--made of bulgur wheat, parsley and tomatoes--on the salad bar on pizza days because the preferred pizza crust does not contain whole grain flour. When tomatoes and cucumbers fell out of season in the fall, they switched to an Asian bulgur salad with carrots, peas and a soy-based sauce.

"I can't say either one has been super popular, but at least we've been able to introduce these items to our students," said chef Brandy Dreibelbis, who develops recipes for Boulders chools. "We stuck with the bulgur wheat, because of the low cost.'

"My hope is that someday we will be able to introduce a quinoa dish to the kids," Dreibelbis added. "I think we could be a little more creative with this ingredient, plus the healthy benefits are amazing. But unfortunately it comes down to the cost and quinoa is still slightly more expensive than bulgur."

Dreibelbis said she recently tested several commercial brands of whole grain bread sticks, but even they come with sticker shock.

"I'm sure that the students would love these with their pasta, but once again it comes down to cost," she said. "These breadsticks would add an additional eight to 12 cents per meal. When you have such a limited amount to spend, even eight cents adds up quickly."

Ann Cooper, who runs food services for Boulder schools, said they stopped serving whole wheat pasta because the kids didn't like it. But if the USDA rules go into effect as written, the regular pasta will no longer be permitted.

"I'm trying to figure out the pasta piece," Cooper said.

Here in D.C., I recently noticed a "whole grain-rich" biscuit being served for breakfast at my daughter's elementary school alongside something called "turkey cheese melt."

The processed turkey slices speckled with melted cheddar were merely unappetizing. The kids picked off the cheese with their fingers to get at the meat. The biscuit...Well, it was hardly recognizable. I happen to love a fluffy white biscuit. What would a traditional southern breakfast be without one? This thing was simply inedible. It looked like an old horse turd.

Some food traditions are better left unchanged--even at school.