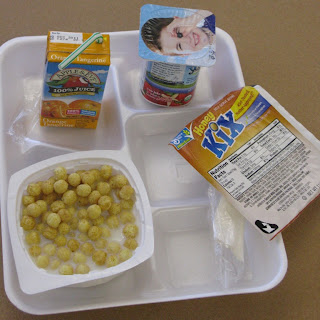 Last year, after I wrote a series of articles detailing in part how kids in D.C. schools were pouring strawberry milk over Apple Jacks cereal and routinely consuming as much as 15 teaspoons of sugar for breakfast, school officials removed flavored milk and sugary cereal from the menu.
Here's one of the replacement cereals we see in school cafeterias now. Kix contains just three grams of sugar--that's less than a teaspoon--in a one and one-quarter cup serving.
There's more sugar--way more--in that small container Stonyfield yogurt. A four-ounce serving of Stonyfield's blueberry yogurt, for instance, contains 13 grams of sugar, or a little more than three teaspoons. That's only slightly less, ounce for ounce, than the sugar in a can of Pepsi.
Good thing, I guess, kids only see this yogurt in a four-ounce size.
For complete nutritional information on Kix, go here.
Posted by Ed Bruske at 6:00 AM