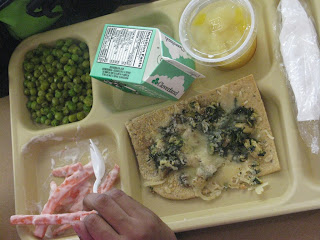 Here's another example of some of the clever new options we're seeing on the menu in D.C. schools this year. Someone thought to take a piece of flat bread and cover it with "chicken Florentine."

Where I come from, "chicken Florentine" means sauteed chicken tossed with spinach and a wine-infused cream sauce. This was a bit more like a pizza (kids love pizza, as we know). I tried it and did not taste any cream or wine, although it was perfectly palatable--more a mouthful of spinach with a bit of onion and some scattered pieces of diced chicken, all topped with some melted cheese.

The kids, on the other hand, looked at it and were completely intimidated by all that spinach. 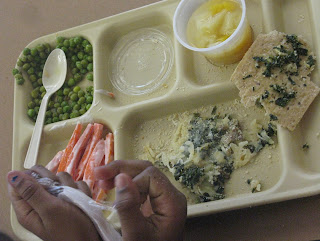 This looked like a repeat of the homemade spinach lasagna experience we've seen before, where kids assiduously work their way around the spinach to get at the pasta and the cheese. In the case of this chicken Florentine, I was surprised to see that most of the kids in the lunch room never touched it.

Just to make sure, I took a walk around the lunch room and, sure enough, the entree in most cases was entirely uneaten. Some of the children--we're talking elementary school kids in the upper grades--were tentatively nibbling on the flat bread around the edges. Others, like this girl here, were a bit more bold. They had scraped all the spinach off the flat bread, then attacked the bread and picked through the green matter to get at the cheese and chicken bits.

On the tray also were some carrot sticks tossed in ranch dressing that were definitely more popular. Many of the kids also had sampled the peas. But just a note here on that: peas are one of those "starchy vegetables," along with potatoes, corn and lima beans, that the USDA proposes in new meal guidelines to sharply limit in the future.

The federal government would like to serve kids much bigger portions of things they don't normally like--vegetables and whole grains--and take away things kids really love, like potatoes (especially French fries). Sound like a winning formula?
Posted by Ed Bruske at 6:34 AM