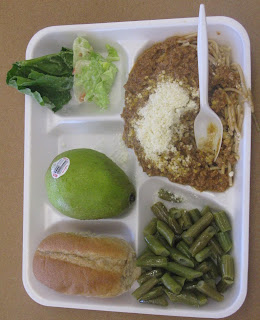 We check the Chartwells menu site each morning to see what's for lunch. On Wednesday, our daughter knew spaghetti was on the menu, yet she still insisted on taking her own steamed dumplings for lunch. It wasn't until she actually saw the pasta with the turkey meat sauce that she decided she had to have it and pushed the dumplings aside.

Yes, kids will go crazy for pasta. But I wondered how well they would take to the "whole wheat" spaghetti noodles in this dish. As I made my way around the lunchroom, asking the kids for their opinion, I heard time after time that they didn't especially care for the pasta. "It tastes like cardboard," seemed to be the general consensus.

And yet they ate it, mostly. And I have feeling they could get used to this kind of pasta--as long as it's smothered in meat sauce. You might recall a spaghetti and meatballs dish recently when the kids wolfed down the meatballs and asked for seconds, but threw the noodles in the trash.

Same goes for this "whole wheat" dinner roll. Most of the kids left it untouched. As they did the green beans. Having been steamed from a frozen sate, they were "seasoned" with a faux butter. I tried them and thought they were just fine. My daughter also liked them. "Hey guys, you should try the green beans!" she urged her table-mates at one point. But they were dubious. 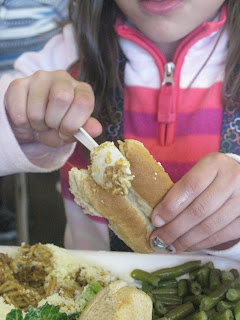 Kids are always experimenting with ways to make meals more fun. Here's one fifth-grade girl who discovered a way to work her dinner roll into the pasta entree. She scooped the pasta with her "spork" and slathered it on the roll, creating a kind of pasta sandwich. 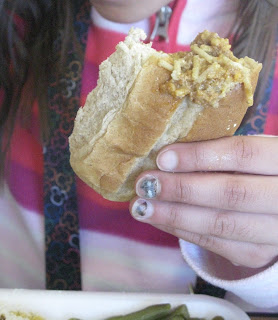 This is what a pasta sandwich should look like. The meat sauce is made by steaming frozen turkey "crumbles," then mixing them with tomato sauce and some dried oregano.
Note the designer fingernails as well.
Note: Occasionally Blogger has a mind of its own where the display of my photographs are concerned. I cannot get the top photo of the meal tray to display horizontally. Just turn your monitor 90 degrees.