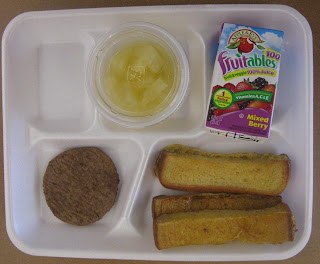 By Ed Bruske
aka The Slow Cook
Are French toast sticks really back in D.C. schools?
This iconic school lunch item is regarded by the some as the epitome of cheap, ersatz school food. A year ago, D.C. school food service official Patricia Massey asked Chartwells dietitian Whitney Bateson in an e-mail exchange: "Can we get rid of French toast stick?"
This year, as part of the many improvements made to school food under the leadership of new food services Director Jeffrey Mills our lunch ladies were making French toast from scratch, using whole wheat bread soaked in liquid eggs. But this week the famous frozen French toast stick re-appeared on breakfast trays. 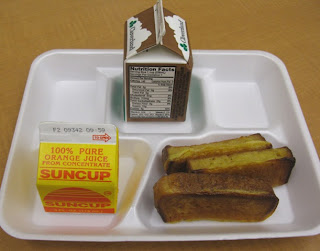 Do they look any different from the French toast sticks served last year, as seen in this photo. (Note the chocolate milk: D.C. schools no longer serve it or strawberry milk. Only plain milk these days.)
The French toast sticks of the past were typically served with a little plastic container of high-fructose corn syrup masquerading as "maple syrup." D.C. schools no longer serve high-fructose corn syrup either. This year, breakfast items like this have been accompanied by flavored yogurt instead.