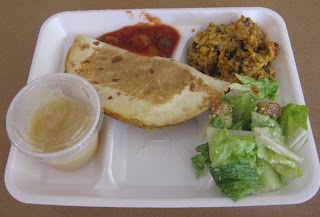 By Ed Bruske
aka The Slow Cook
Kids like Mexican food at school. Even my daughter, who normally turns up her nose at the food served at school, will eagerly get in line for a cheese quesadilla. You could probably serve a version of quesadilla every day and get no complaints from the kids. 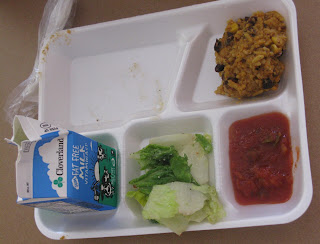 The side dishes, however, are another matter. This is what most of the trays looked like at the end of the lunch period. The "Santa Fe brown rice with black beans," as Chartwells called it on its menu website, went entirely untouched. Ditto for the salad of romaine lettuce.
That pool of red stuff you see there is what Chartwells calls a "salsa cup." Some of the kids did dip into that with their quesadilla, but not so much. In other words, except for the quessadilla, most of the food on this menu was wasted.
Posted by Ed Bruske at 6:41 AM