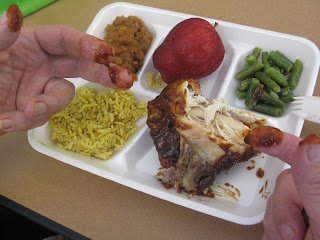 By Ed Bruske
aka The Slow Cook
My daughter says she doesn't like the chicken at school because it's "never cooked right." She says it's either overcooked, or it's covered in sticky barbecue sauce.
Well, in the case of the barbecue chicken, I'd say she's way off the mark. There's no lack of sauce. But I thought the meat was done about as well as you might expect. It was downright edible, in fact. The only question is, How exactly are you supposed to eat it?
As you can see in the photo, my fingers were quickly covered in the gooey sauce--the kind that comes out of a big plastic jar. Tasty, but pretty sugary.
A stroll around the lunch room revealed that most of the kids also had their hands covered in sauce. 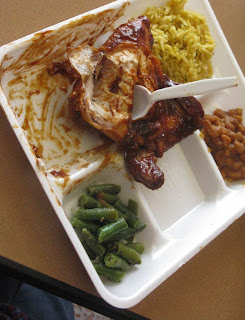 The reason, of course, is that a plastic spork is virtually useless against a bone-in chicken breast, although some kids tried. Mostly they picked at the chicken, and by that I mean chiseled, using the spork to break off pieces of meat.
Before lunch was over, kids were swarming into the nearby bathrooms across the hall to wash their hands. I swear, this is one school lunch that should be served with moist towelettes. 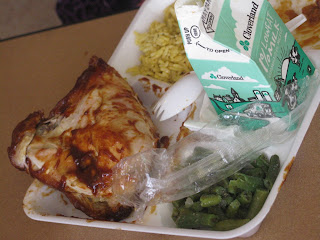 Then there were a couple of girls at my daughter's table who just went for the skin, peeling it off and slurping up all that sugary sauce. When I asked one of them why she was doing that, she replied: "I really don't like chicken."
She just likes the skin slathered in sauce.
As you might guess, the kids didn't do much with the green beans or the rice you see on these trays. That mostly got tossed in the trash. But some of them did poke around the baked beans. Those also were tarted up with sugar.
Lesson: kids love food spiked with sugar.
Posted by Ed Bruske at 6:43 AM