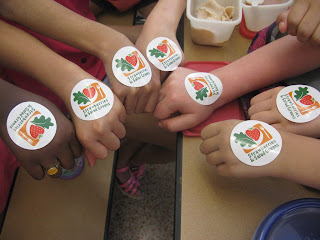 By Ed Bruske
aka The Slow Cook
Yesterday was the annual big event for our D.C. Farm to School Network: Strawberries and Salad Greens. Network coordinator Andrea Northup outdid herself this year: schools in all eight wards of the city had volunteers signed up to engage kids in learning where their food comes from, specifically the strawberries and salad from local farms that were served for lunch.
All of the kids in the cafeteria got a sticker and they proudly showed them off. 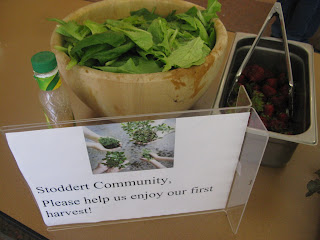 At my daughter's school, there was a display of salad greens from the newly installed gardens. The strawberries, supplied by local farmers, were incredibly ripe and delicious. 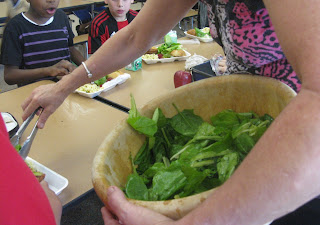 This year I acted as "contact" for the event at daughter's elementary school, meaning I dropped by an "orientation" last week hosted by Whole Foods, where volunteers were supplied with all sorts of signage, photos of local farmers in action, and stickers to hand out to the children featuring original logo art.
Here you can see my wife doling out salad greens. She was impressed by how many of the kids requested salad--hesitatingly at first, but once one of two agreed to try it, soon they were all clamoring for it. Just shows why school cafeterias need more adult presence to coach kids in better eating habits. 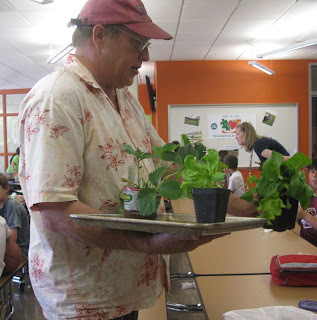 The original concept was to have a table posted near the cafeteria where the kids could see the signage and photos and get their sticker. In our case, there wasn't really anywhere to put such a table, so I went around the room with a display of lettuce and strawberry plants that the farm to school network had conveniently dropped off at my home on Tuesday.
"Hey, kids! Did you know that lettuce and strawberries grow out of the ground?"
Some kids actually said, no, they didn't know that. Many of them wanted to touch the strawberry leaves, others asked if they could eat the lettuce. I think they were joking.
In the background, you can see the bulletin board where we taped the various signage and photos supplied by the farm to school network. No sooner had we posted it in the morning than a group of kids gathered to inspect a seasonality chart.
"Oh, I've had asparagus before," said one boy.
"Me, too," said a second. "I really like it." 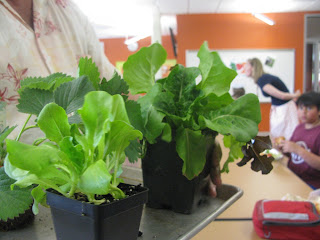 Once we had the kids going, they were hard to stop. Soon they were following me around the cafeteria, telling me about the vegetables they grow at home.
"I have two strawberry plants," said one little boy. "The strawberries are about this big," he said, using his hand to indicate berries that weren't ready to eat yet.
"My grandmother grows rhubarb," said another.
Who likes strawberries? I asked them. They all raised their hands.
Posted by Ed Bruske at 6:53 AM