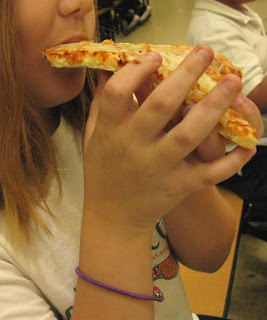 What could this 10-year-old eating lunch in a grade-school cafeteria in the District of Columbia possibly have to do with a 23-year-old guy delivering ice cream in rural Minnesota?

The answer, of course, is the pizza the girl is eating. It came from a multi-billion company started by Marvin Schwan, who broke into the food business in 1952 schlepping ice cream in an old panel truck out of Marshall, MN.

Today, according to the company's website, Schwan's Food has a presence in some 50 countries and employs more than 17,000 people. And it's still privately owned. Marvin Schwan was known as the "emperor of ice cream" when he died of a heart attack at age 64. But along the way, he built a diverse empire on the principles of feeding frozen convenience foods to the masses.

In 1970, the company placed a simple ad in the Wall Street Journal: "Wanted: Frozen Pizza Manufacturer." The result was Schwan's purchase of the Tony's brand pizza and its manufacturing facility in Salina, KS. That's a Tony's pizza the girl in the picture is eating.

Today, Schwan's has pizza plants in England, France and Germany as well as in the U.S. It also claims to be the world's largest maker of egg rolls.

It does seem a bit ironic that some companies are getting extraordinarily rich in part by selling frozen convenience foods to schools that say they're too poor to feed kids real food. Pizza is, hands down, the favorite food of American school children. This one arrives frozen in 28-pound boxes of neat little rectangular slices. Just 15 to 20 minutes in a 375-degree convection oven and the pizzas are ready to serve.

Here, according to one of those boxes, is what the pizzas are made of:

Schwan's is on the government list of 112 companies authorized by the U.S. Department of Agriculture to turn raw "commodity" food products donated by the federal government to its school meals program into finished processed foods that schools can serve directly to kids. That gives Shwan's fairly exclusive access to some 31 million children who eat a federally-subsidized school lunch every day.

Welcome to the business of school food.
Posted by Ed Bruske at 6:00 AM