Breakfast in a Bag 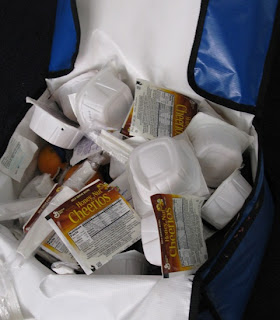 Here's my first photograph of the new "breakfast in the classroom" in D.C. schools, taken last Friday. My daughter's school held an all-day May Day celebration (delayed until June because of the heat), and for some reason the breakfast that had been carried to the classroom from the cafeteria was never eaten.

As you can see, the food is transported in insulated travel bags, the same bags the school has used in the past to take fruits and vegetable to the classrooms for mid-morning snacks. A quick inventory revealed Honey Nut Cherrios in plastic tubs, plastic "sporks," packets of graham crackers, fresh oranges and plain and flavored milk.

According to reports from parents and students, hot items were included in the breakfasts when the pilot project began last week, but lately only cold cereals have been served. 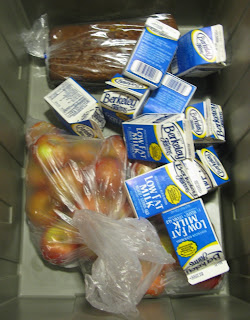 While I was reporting on school meals recently in Berkeley, CA, I had an opportunity to pack breakfast bins for that school district's breakfast in classroom program. Breakfasts in Berkeley are much simpler and generate less waste. In this example you see a loaf of home-made banana bread from a local bakery along with kid-size apples and plain, organic milk.

On other days the bins contain packets of organic Nature's Path cereal, and sometimes juice alternates with the milk. You don't see any plastic eating utensils in the bins. When cereal is served, the students either eat it directly out of the packet, or they can pour it into the milk carton.

Which breakfast would you rather your child ate?
Posted by Ed Bruske at 6:00 AM