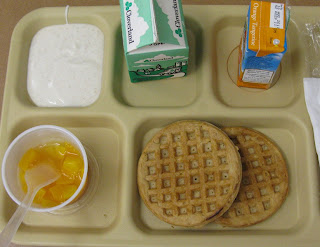 All these months I've been writing about the food in my daughter's elementary school and I have to admit, I don't actually taste the food that often. Not that I wouldn't, but the photos I take are of food the kids are eating. I don't have a tray of my own.

But every once in a while daughter comes back from the food line with things she has no intention of eating. For instance, for this breakfast--served free to all students, courtesy of D.C. Public Schools--the only thing my daughter really wanted was the juice. She may have eaten some of the canned peaches.

So I got to try the waffles and I must say they aren't nearly as good as they look. They're really crispy. They arrive pre-made and frozen. Then they're reheated. This year, instead of serving them with high-fructose corn syrup masquerading as maple syrup, the schools are offering yogurt, sometimes a flavored yogurt--such as raspberry--sometimes vanilla.

The yogurt's pretty sugary, but it's certainly better than high-fructose corn syrup. I'm not necessarily opposed to canned peaches either, as long as they're not swimming in a sugary syrup. But what's with the plastic cup? That's an expense the schools could save just by spooning the peaches onto the tray.

Sometimes they do spoon the fruit directly onto the tray. I'm mystified by the decisions food services makes.
Posted by Ed Bruske at 8:00 AM