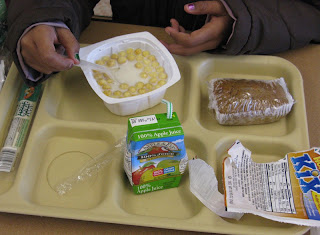 Over the summer, the food services director for D.C. Public Schools decided to remove flavored milk and sugary cereal from school breakfast menus. The means no more Apple Jacks or Raisin Bran. Instead, the kids are served only cereals with six grams of sugar or less.

According to the General Mills website, these Honey Kix, made primarily of corn, contain six grams of sugar in a 1 1/4 cup serving. Next to it is an "apple cinnamon muffin," according to the Chartwells menu website. It doesn't have any packaging identifying the nutritional content. The Healthy School Act approved by the D.C. council earlier this year requires the schools to post the ingredients in school food. But a website containing that information and promised for November has now been delayed till next year.

Notice also the string cheese on this tray. That's also something new that began in the fall. All in all, this is a big change from the Apple Jacks, strawberry milk, Pop-Tart and Giant Goldfish Graham breakfast--often 15 teaspoons worth of sugar first thing in the morning--D.C. kids were getting as recently as last spring.

The big change had nothing to do with Congress or the USDA or even our own Healthy Schools Act, and everything to do with the bold action of our local food services director. Even though school meals are funded mostly by the federal government, it's much easier to make change at the local level than to wait for Uncle Sam.
Posted by Ed Bruske at 6:22 AM