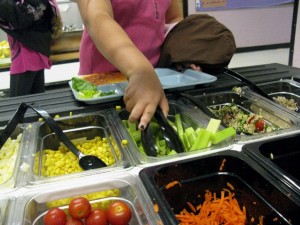 The U.S. Department of Agriculture has removed a serious hurdle confronting Michelle Obama’s campaign to place 6,000 salad bars in the nation’s schools after advocates expressed alarm over a government memo indicating that self-serve salad bars would not be permitted in elementary schools.

Backers of the Let's Move Salad Bars to Schools campaign said local health inspectors already were citing the October 8 memo from the USDA’s Child Nutrition Division as a reason for declaring self-serve salad bars a potential food safety hazard and not allowing them around small children.

The memo, signed by Cindy Long, director of the Child Nutrition Division, and circulated nationwide, described only two options for salad bars in elementary schools: salads must be pre-assembled and pre-wrapped, or they must be served by an adult working behind a barrier separating children from the food.

After being questioned by me on these points, Jean Daniel, spokesperson for the USDA’s Food and Nutrition Services (FNS) division, which governs the national school lunch program, said there was a third option not contained in the memo: elementary school children could serve themselves salad as long as the salad bar was designed specifically for small children with a plastic barrier or “sneeze guard” positioned at an appropriate height.

The FNS later issued a written statement, saying, “USDA does not prohibit self service salad bars, and they may be used in elementary schools. USDA encourages the use of fresh fruits and vegetables in school meals. Self service salad bars are one approach that can be successfully included in the meal service when monitored closely to ensure safety.”

An alliance of produce industry, school food professionals, health advocacy groups and government agencies has formed under the first lady’s Let’s Move banner with a goal of placing 6,000 salad bars in schools around the country over the next three years at an estimated cost of $15 million.

Organizers hope to fund the effort through a combination of corporate and private donations, and by creating a website where schools will have individual accounts where they can direct donors from their own communities to make contributions as large or as small as the like.

“It’s still a work in progress,” Cooper said. “There’s still a long way to go.” But the project is scheduled to begin accepting applications from individual schools on Jan. 1, 2011. “We’re expecting thousands and thousands of applications,” said Cooper, who estimated there are at least 80,000 schools in the U.S. without salad bars.

The salad bars in question, made of polyvinyl and chilled with ice packs, cost $2,500 each. “If a school found 500 people to each donate $5, they could have a salad bar,” Cooper said. Any school that participates in the national school lunch program is eligible to apply. They must show that the local schools superintendent, the school principal and the food services director are committed to using a salad bar on a daily basis. Preference will be given to schools with large numbers of low-income students, and those that have achieved at least the bronze level in the HealthierUS Schools Challenge.

Cooper recently was involved in a similar campaign in which Whole Foods garnered $1.4 million in donations from its customers in order to donate salad bars to schools. Cooper's Food, Family, Farming Foundation, based in Boulder, will be in charge of managing the application process for the Let's Move campaign.

Another principal partner in the Let’s Move alliance is United Fresh, a produce industry trade group, that began its own salad bar campaign two years ago backing legislation sponsored by U.S. Rep. Sam Farr (D-Calif.) that called on the USDA to increase fruits and vegetables in school meals. Farr represents the produce-rich Salinas Valley.

Ray Gilmer, spokesman for United Fresh, said the legislation “never got much traction,” but generated some buzz around salad bars. A year ago, United Fresh began soliciting donations from its corporate members to purchase salad bars and place them in schools. “A lot of companies want to place them in the communities where they operate, a sort of ‘good neighbor’ thing,” Gilmer said.

Gilmer said the United Fresh campaign was low-key, conducted mostly by word of mouth and through internet chatter. To date they’ve given away 60 salad bars and plan to donate a undetermined amount of cash to the Let’s Move campaign. "We're going to New Orleans for a convention, and we’ve already placed 10 salad bars in schools there," Gilmer said.

A third partner in the White House effort is the National Fruit and Vegetable Alliance, composed of the USDA, the U.S. Centers for Disease Control and Prevention (CDC) and such disparate groups as the American Cancer Society and the California Department of Public Health.

The CDC has emerged as a leader of the group, taking up fruits and vegetables as a key ingredient to preventing diet-related diseases such as obesity and Type 2 diabetes.

“Self-serve brings a number of management issues that we’d have to look at,” said Philadelphia schools spokesman Fernando Gallard. “Basically, you’d have a salad bar in an open area where people are going to walk around it. That’s something we still have to consider, the sanitation issues.”

Ann Cooper has complained about USDA regulations that require students who use the salad bar as a component of a reimbursable meal to pass a cashier or point of sale station where a trained cafeteria worker would inspect the student’s tray and confirm that the student had taken the required items in the correct portion sizes. Cooper said such rules can create a logjam in the cafeteria.

Here in the District of Columbia, many food service areas are not designed to accommodate a salad bar. Installing one would require rethinking how students pass through the meal line and where the cashier is situated.

Kate Adamick, a school food consultant and fervent salad bar advocate, said those obstacles can be overcome without too much difficulty. "I don’t think there’s any other way to serve produce in school," she said. Most cafeteria vegetables are cooked to death or come out of a can and kids either refuse them in the service line or throw them in the trash. Adamick believes children eat more vegetables when they're allowed to serve themselves from an array of fresh choices. "When kids get to make their own decisions, they’re much more likely to try things."