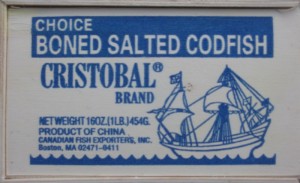 Salt cod from China? A tradition lives on....

Before refrigeration, fisherman plying the rich Atlantic waters off Canada dried and salted their harvest of cod. The cod are mostly gone, but the tradition lives on, nowhere more so than in Portugal, where there are said to exist at least 1,000 recipes for preparing salt cod.

Salt cod isn't exactly a convenience food. You have to soak it at least 24 hours in several changes of water to remove the salt and rehydrate the flesh. But I couldn't very well take my food appreciation classes to Portugal on our virtual world culinary tour without sampling at least one salt cod dish, and this casserole--simple as it is--remains a classic.

The first order of business is finding the salt cod. I purchased mine at our neighborhood Harris Teeter where it comes pre-boned in this nifty wooden box. I'd never heard of salt cod from China before. But perhaps that's where they're sending the fish these days to be processed. You can also find it in ethnic groceries, any catering to Latin, African or southern European clientele are a good bet. Normally I wouldn't think of eating Atlantic cod. It's been so overfished, the Monterey Bay Aquarium's Seafood Watch program advises consumers to stay away from it. But you can't very well make a traditional Portuguese salt cod dish without it.

To make enough to feed a family of four, soak 8 ounces salt cod in a covered container, refrigerated, for 24 hours, changing the water three times. Remove the cod and place it in a heavy pot, cover it with boiling water and cook over moderately low heat for about 10 minutes, or until the fish flakes apart with a fork. Drain the fish and when it is cool enough to handle, break it into small pieces with your fingers, removing any bones and skin. Set aside.

Meanwhile, peel 1 pound boiling potatoes, such as Yukon gold. Cut the potatoes into quarters lengthwise, then cut these pieces into 1/4-inch slices. Cook the potato slices in plenty of salted, boiling water until just tender. Drain well in a colander.

While the potatoes are draining, brown one yellow onion, cut in half and sliced thinly, in extra-virgin olive oil at the bottom of a heavy, oven-proof skillet. When the onions have caramelized and smell quite delicious, remove them from the skillet and brown the potatoes in the same fashion, adding more olive oil as needed.

Remove potatoes from the heat. Add the browned onions back to the skillet along with the flaked fish and a small handful of chopped fresh parsley leaves. Toss everything together and place in a 350-degree oven for about 20 minutes, or until the fish has lightly browned and the casserole is sizzling hot. Garnish with pitted, oil-marinated black olives, chopped hard-boiled egg and a little more chopped parsley.

This makes a simple supper, but oh so good. And there's plenty of handwork-slicing onions and potatoes, flaking fish, pulling parsley leaves--for the kids to do. Just be sure to have extra olives on hand. The kids really go for those.