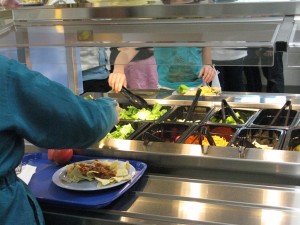 Somehow Congress can find money to give tax breaks to billionaires. But in a little-noted provision of its reauthorization of child nutrition programs, signed into law yesterday by President Barack Obama as part of the Healthy, Hunger-Free Kids Act, lawmakers have told schools to raise lunch prices to at least cover what it views as the full cost of making a meal. Entitled "equity in school lunch pricing," the new mandate could, by increasing prices gradually for students whose families aren't low income, pump an additional $2.6 billion into the school meal program over the next 10 years, according to one estimate.

While that's a much-needed infusion of cash, school food services professionals say the move could have the side effect of driving hundreds of thousands of children from the federally subsidized school meals program. The School Nutrition Association (SNA), representing some 50,000 food service workers across the country, likens the new law to cuts in federal support for school meals enacted during the Reagan years, when participation in the National School Lunch Program plummeted 25 percent among full-price students because schools were forced to charge more -- and ketchup was declared a vegetable.

"When you raise prices, it has a real impact on participation," said SNA spokeswoman Diane Pratt-Heavner. "Our members tell us time and time again, even when they raise prices by just a dime, they see participation drop."

"The downside of raising meal prices during these tough economic times is that you run the risk of making the meals unaffordable for kids whose families just barely miss the financial eligibility cut-off," said Kate Adamick, a school-food consultant who has long complained about the pricing disparity. "This is a significant reality in lower-middle class communities, especially for schools located in parts of the country in which the cost of living is extremely high, such as New York City and San Francisco, to name just two. I think this is the right change that may be coming at the wrong time."

Federal subsidies for school meals are intended primarily to help feed low-income children, who receive meals either free or at a reduced price. Even kids who don't qualify and pay "full price" in the subsidized meal line are actually supported by federal funds to the tune of 26 to 34 cents per lunch. But what most schools charge for a full-price meal typically is less than the federal subsidy, currently $1.48 for breakfast and $2.72 for lunch. For instance, here in the District of Columbia, schools serve breakfast free to all students regardless of their ability to pay, while a full-price elementary school lunch is only $1.25, a high school lunch a mere $1.50.

Free breakfasts and underpriced lunches help explain why D.C. schools rack up $7 million in food service deficits every year, or 25 percent of the entire budget.

Critics argue that underpricing also helps explain why schools never seem to have enough money to improve the quality of the food they serve, and that low-income children should not be short-changed in order to support kids who come from wealthier homes, even though there is nothing in federal law to say that government subsidies can only be used to feed needy students. Food service professionals counter that lower prices attract more kids to the meal line, creating economies of scale and helping to lower the marginal cost of meals served in a program they contend is chronically underfunded.

"We all know the effect of higher prices on people's purchasing decisions, and this basic economics lesson applies to school meals as well," Pratt-Heavner said. The new rule, she said, is likely to fall heaviest on families in rural and economically depressed areas where parents "simply cannot afford to pay the higher school-lunch prices charged in wealthier suburban neighborhoods."

Under the formula approved by Congress, schools that are not charging the full cost for lunch would have to start raising their prices annually by an amount equal to the rate of inflation plus 2 percent. For some schools, getting their prices fully caught up could take 20 years.

A study released in January 2010 by the Center of Budget and Policy Priorities (CBPP), a nonprofit research organization focused on low-income Americans, noted that student payments for federally reimbursable meals account for only about one-quarter of school food-service revenues. The greatest share of income comes in the form of federal subsidies, with sales of competitive foods in á la carte lines (often unhealthy snacks like cookies and chips) and vending machines contributing about 16 percent, and state and local governments chipping in another 9 percent on average.

Adamick said most of the schools she visits underprice their meals. "The rationale usually given is that the board of education doesn't want to raise prices because it will be unpopular with parents and may drive down participation (not to mention the liklihood of a board member's re-election). In some districts, the meal prices haven't been raised in many, many years."

A study conducted during the 2005-2006 school year by the USDA, which oversees the school meals program, found that the prices schools charged for paid lunches varied widely, from 65 cents to $3, with the most common price being $1.50 -- well below cost. A more recent analysis by the CBPP of the nation's 20 largest school dischool districts found that the average charge for lunch was $1.80 in elementary schools and $2.14 in high schools, still far less than the federal reimbursement rate.

Houston schools this year experienced what they described as a grave development in their cafeterias. Because of "food prices soaring nationwide," the cost of a paid meal would have to go up: from $1.50 to $1.70.

"School districts generally want to set a price that is affordable for the wide range of families with incomes in the paid meal category," the CBPP concluded. "The disparity results in a revenue shortfall that undermines the goal of providing the highest quality meal possible to all students."

The Center on Budget and Policy Priorities cited a USDA study as showing that student participation in the subsidized lunch program was only 3 percent lower in districts that charged $2 per meal compared to $1.50 per meal. But in a program involving more than 31 million children nationwide, that 3 percent would represent nearly 1 million students.

Said the SNA's Pratt-Heavnery: ""Unfortunately, no one knows how severe the decline in participation will be as a result of [the new law], and that’s a risky gamble to play with a program that is vital to the nutrition and well-being of millions of school children."

This story originally appeared at Grist.