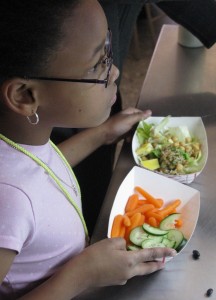 Who will pay for healthier school food?

aka The Slow cook

School food is poised to look less like prison fodder and more like a Moosewood Restaurant buffet if new USDA guidelines are adopted. Colorful vegetables—lots of them—more whole fruit, more whole grains, less salt, less processed junk—that’s the plat du jour. The only question now is, who picks up the check?

A tight-fisted Congress would only ante up 6 extra cents for school lunch in its recent re-authorization of child nutrition programs. Now the USDA says that’s not even close to covering all the goodies school food advocates have been asking for. Between more expensive ingredients and the increased labor needed to turn them into meals, the USDA estimates [PDF] school lunch soon will cost an extra 15 cents, and breakfast a whopping 51 cents more.

That compares to the $2.72 the federal government currently pays schools to provide a fully-reimbursable school lunch, $1.48 for breakfast.

According to wonks in the USDA’s Food and Nutrition Services branch, the money to pay for these long-awaited changes will just have to come from state and local governments that at the moment are worse than broke. In other words, schools will be switching out frozen tater tots for fresh sweet potatoes and replacing processed beef crumbles with scratch-cooked spinach lasagna at the same time law makers are sending pink slips to teachers, shuttering health clinics for the poor, and unscrewing light bulbs in street lamps to resolve the worst budget deficits since the Great Depression.

Is anyone else feeling a teeny bit of buyer’s remorse?

I count myself among those who think the food served to kids in school could be a whole lot better. But something about the notion that kids must have fresh local broccoli on their lunch trays while teachers worry about the next mortgage payment doesn’t sit right. I’m doubly conflicted, because after a year of writing about school food on a daily basis, and monitoring what goes on in the cafeteria at my daughter’s elementary school here in the District of Columbia , I know that kids routinely refuse to eat and throw in the trash vast quantities of those very same vegetables and whole grains that constitute such a large portion of the looming school meals bill.

And it's not just me. Here's a Chicago Tribune story exposing the same thing in cafeterias there. The Tribune found hundreds of pounds of food being tossed in the trash in a single school, including unopened cartons of milk and juice, uneaten oranges and bananas, whole cartons of cereal. Just as they do here in D.C., Chicago school children describe the healthier food as "nasty."

We are about to embark on a multi-billion-dollar culinary experiment with unknowable results. This is faith-based nutrition on a huge scale. Nationwide, the USDA says the proposed changes will add $6.8 billion to the cost of preparing school meals in the first five years, compared to the $13 billion the federal government spends annually on school feeding programs.

State and local governments currently contribute around nine percent of the total cost of school food service. In California alone, the new guidelines will add $75 million to the annual bill just for fruits and vegetables, according to the Environmental Working Group. Where will Sacramento, currently in utter budget meltdown, come up with such a sum? The EWG proposes diverting money currently paid to subsidize dairy, cotton and rice farmers.

In an effort to wrap my head around all this, I recently spent a few hours reviewing financial briefs for all 50 states. I could hardly have assigned myself a more dismal task. It truly is a blood bath out there. According to the Center on Budget and Policy Priorities [PDF], states are seeing the worst decline in tax revenues ever recorded. So far, at least 46 states have reduced services and 30 have raised taxes to some degree. With billions in federal stimulus dollars drying up, local budget woes will only get worse—and stay bad for years to come. Even education spending is now fair game for deficit hawks.

Los Angeles, described as on the brink of bankruptcy, is planning to send pink slips to 4,000 teachers, just in case the city needs to let some of them go.

New York Gov. Andrew M. Cuomo has called his state “functionally bankrupt,” and proposes to close most of a $10 billion budget shortfall by reducing education funding and Medicaid.

New Jersey Gov. Chris Christie tells voters he will not raise taxes, but his approach to addressing an $11 billion budget deficit would include cutting $820 million in education funding.

And in Madison, Wis., thousands of state workers—including teachers--recently rallied to protest Gov. Scott Walker’s plan to cut their benefits and bargaining rights--and his threat to call out the National Guard if things get out of hand.

Here in D.C., extra funding for school meals approved under a “Healthy Schools Act” narrowly avoided budget cuts last year. But now the city faces a huge new shortfall of some $600 million, much larger than anticipated.

How does all of this square with the idea that schools should be feeding kids fresh chicken on the bone rather than re-heated chicken nuggets? Advocates would say we need to embrace the USDA guidelines in order to head off an epidemic of childhood obesity--and the nearly $300 billion estimated annual cost of medical care and lost productivity due to weight-related illness. But do kids really need a full-blown restaurant meal covering all the food groups every day?

Already schools on average lose more than 30 cents on every lunch they serve. They may soon be forced to start charging students higher prices. Yet Lucy Gettman, director of federal programs for the National School Boards Association, says the outlook for funding school meals may not be so dire. Some states and some school districts have already been moving toward the kind of food service the USDA is proposing.

But there’s more turbulence on the horizon. Pending standards for food sold in vending machines and in school stores—presumably requiring healthy choices rather than candy, chips and soft drinks—will likely cut into food service revenues, Gettman said. Congress has also told the USDA to examine how schools assign operational costs to food service, another potential drain.

“Over the last few years, three dozen states have either changed state laws or have considered changing state laws regarding school nutrition,” Gettman said. “Every state and every school district is probably going to be in a different place. Some may be very close to meeting some of the standards. But for those that haven’t, there may be a very wide gap.”

The School Nutrition Association, representing some 53,000 school cafeteria workers across the country, is looking for ways the federal government can contribute more to pay for the new meal standards. For starters, they are asking the USDA to consider giving schools credit toward commodity food purchases for serving breakfast.

The USDA currently awards schools about 20 cents toward purchasing commodity goods for every lunch meal they serve. The program does not cover breakfast, and many schools are now trying to increase breakfast service by offering it in the classroom, which serves the dual purpose of ensuring kids aren’t forced to learn on an empty stomach while also generating more federal reimbursements for the food program.

Still, I can’t help thinking there ought to be a way to make school food much less complicated. There must be a better funding mechanism that doesn’t pit kids against other worthy government programs for the needy.

Maybe it’s time for a national guilt relief act in the form of a big, fat federal tax on soda and junk food that pays for school lunch. Now that's something I would not lose any sleep over.