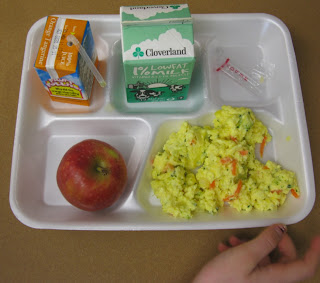 The lunch ladies at my daughter's elementary school turned liquid eggs into this fabulous dish of scrambled eggs with broccoli, carrot, onion and cheddar cheese. It looked so good, I had to try some myself and it was terrific.


Unfortunately, the kids were less enthusiastic. "The eggs are different," said one fifth-grader. Well, of course they were. They were scrambled instead of being served cut into squares, explained the kitchen manager.


Chartwells at its menu website also advertised "whole wheat toast or all natural whole brain banana bread" with this breakfast, but I didn't see it.

Kids are often terribly picky sometimes. My daughter, for instance, would never eat this because of the bits of vegetables in it. She likes her veggies served separately in a recognizable form. But that just proves again that you can't just invent new stuff, re-write the menu and expect kids to eat it.

Most parents would never know. They'd look at the menu and think they're kids are getting an improved version of school food. But there's a step missing in the process: you have to market the new foods to the kids. That means getting staff or volunteers into the cafeterias talking to the kids, conducting tastings, coaching them on better eating habits.

This would be a great role for parents to play--cafeteria coaches. Schools in Boulder, Colorado, have had great success with this approach. But in D.C., the schools don't involve parents. They barely even talk to us.