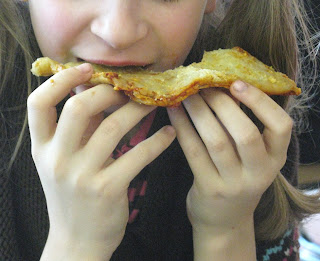 By Ed Bruske
aka The Slow Cook
I was intrigued by this "Sicilian cheese pizza with whole wheat crust"--so described by Chartwells at its menu website--because I had never seen a pizza so thin.
Turns out it was made with rectangular pieces of flat bread that conveniently fit precisely at the bottom of a stainless hotel pan. They're then slathered with tomato sauce and topped with mozzarella cheese. 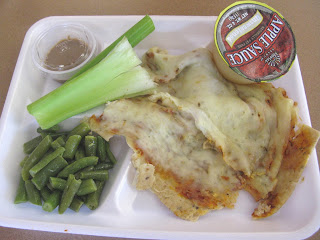 The pizza, big slabs of it, did not look especially appetizing on the trays. But I tried it and it was quite good--if a bit limp. The "crust" was very soft. I wouldn't call it a crust at all.
What also fascinated me about this menu was the selection of sides. The green beans are pretty standard. But this celery? Really?
The Chartwells menu called for carrots with salad dressing, so I'm guessing the celery must have been a substitution for carrots that were never delivered. 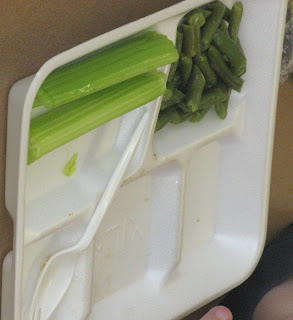 The beans, delivered frozen, were steamed and seasoned with phony butter. I liked them, but the kids didn't touch them. They didn't touch the celery either. I took a walk around the cafeteria and didn't see a single child eating the beans or the celery. I may have missed a couple. But from what I could tell, all of these vegetables simply got dumped in the trash.
This is what most of the trays looked like after the kids finished their pizza.
Posted by Ed Bruske at 6:00 AM