How Much Food do Kids Throw Away at School? 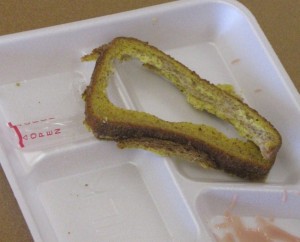 Kids eat what they want and throw the rest away

Experts say they can't be sure kids will actually eat the increased portions of fruits, vegetables and whole grains called for in new USDA school meal guidelines. And now the Chicago Tribune reports that kids in Chicago are turning up their noses at healthier food. At one school, the Trib measured and found that hundreds of pounds of food were being tossed in the trash ever day at just one school. That included whole apples, oranges and bananas, entire cartons of milk, unopened boxes of cereal.

I observe the same phenomenon every day at the elementary school my daughter attends here in the District of Columbia. I usually stop in twice a day--breakfast and lunch--and photograph the food while watching to see what the kids are eating--or not eating. What I see routinely are kids rejecting "healthier" foods, especially vegetables and whole grains.

Recently, for instance, I was surprised to see kids lining up for seconds at lunch before some kids had even been served their first portions. Turns out what they wanted were the meatballs that came with their whole wheat spaghetti. Otherwise, the pasta along with a wonderful green been salad, a side of corn and a whole wheat roll all went into the garbage can.

So called "plate waste" is nothing new to officials at the U.S. Department of Agriculture, which administers the school lunch program. In fact, schools use an "offer versus served" option in the meal line designed to cut down on food waste. In order to qualify for federal reimbursements, schools using this option must offer at least five items representing the various food groups, along with milk. But kids are only required to select three of the items. The program is mandatory in upper grades, and optional in elementary schools.

The USDA has studied food waste in school cafeterias, but not since 2002. That study [PDF] did not collect new data, but surveyed the existing studies researchers were able to locate. Their conclusions:

* Food waste comprises about 12 percent of total calories selected by students in the meal line, as reported in the USDA's 1991-92 School Nutrition Dietary Assessment. This is said to be in the "normal" range. But some studies have found the figure ranging as high as 37 percent.

* Food items most frequently thrown away uneaten are salad, vegetables and fruit.

* The value of wasted food is probably around $1 billion annually.

Researchers found that some strategies, such as allowing kids to create their own plates at "food bars," help cut down on food waste. But food bars are difficult to implement because of the additional equipment involved. Plus, after the kids make their selections, they then must pass a cash register or "point of sale" station so that an adult can confirm that they have taken the correct foods in the required portion sizes. Imagine the traffic congestion this can create in the cafeteria.

Another way to reduce waste is to serve better food. But the Tribune reported that one of the reasons children in Chicago rejected the cafeteria food was because it wasn't seasoned. The USDA's proposed guidelines would reduce salt in school food by half over 10 years to reflect the advice given in the Dietary Guidelines for Americans. Americans get most of their salt from processed foods, which means the food industry will have to find ways to make processed food with much less sodium, or schools will have to start cooking a lot more meals from scratch. Most are not equipped to do so at the moment.

The USDA also is funding research into how behavioral science might be deployed to get kids to actually eat healthier foods rather than throwing them away.

Schools may also be able to increase student acceptance of foods by involving them in menu selection and by incorporating nutrition education programs that include taste-testing foods in the cafeteria before they are served. As I've noted many times, the menu here in D.C. has improved significantly in the last year, but there's nobody in the cafeteria talking to the kids about it. Consequently, I've seen all sorts of great food--sauteed local zucchini, for instance, or roasted local sweet potatoes--going straight into the trash without the kids so much as trying it.

The proposed USDA meal guidelines call for doubling fruit and vegetable portions and vastly increasing "whole grain-rich" products in the food line. These changes are likely to increase the cost of serving school food dramatically. But unless steps are taken to engage kids and their parents in this process, my guess is that a great deal of that food will end up at the landfill.