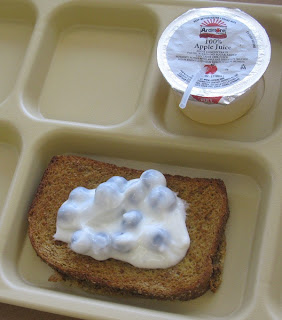 Here's a different way to serve French toast: dressed with yogurt and blueberries. It sure beats the high-fructose "syrup" the D.C. Public Schools served in the past.

Chartwells at its menu site called this French toast "homemade" and it did look quite a bit different than the processed French toast strips that arrived at school frozen from a distant factory. I didn't have a chance to ask the kitchen ladies how it was prepared, but I imagine they could have dipped the bread in batter and baked it in the oven.

Of course this wouldn't really work for the many schools in the District of Columbia that have switched to serving breakfast in the classroom and no longer serve breakfast in the cafeteria. But those are only schools where 40 percent or more of the students qualify for free or reduced-price meals. Their breakfast menu called for turkey ham and egg on a whole wheat English muffin, or the same breakfast that was served in my daughter's elementary school on Tuesday. 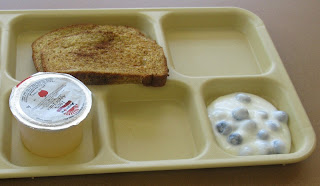 One of the interesting questions in school cafeterias is how you eat something like this French toast without a knife and fork. Our schools only offer a plastic "spork" as eating utensil. What I was unable to capture with my camera was the boy who was eating his toast smeared with yogurt like an open-faced sandwich--with his hands. In this photo, you see that my daughter asked for her yogurt on the side. She also used her hands to eat the toast, since it is otherwise very difficult to cut.

Notice also that there's been a switch in yogurt, from a fruit-filled yogurt served in sealed, individual four-ounce containers made by Upstate Farms, to an organic, vanilla-flavored yogurt from Stonyfield Farm. The Stonyfield yogurt has slightly less sugar in it--but it's still a lot, 14 grams (2.5 teaspoons) in a half-cup serving, the same, ounce-for-ounce, as Classic Coke.

The question is still on the table: Can't anyone make a decent yogurt for kids without so much sugar? 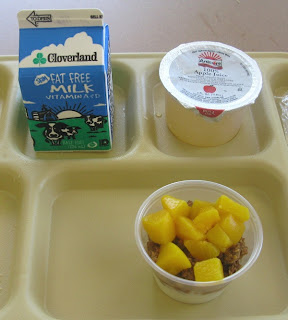 This was the alternate breakfast: a parfait of yogurt, homemade granola and canned peaches. You have to love the presentation.